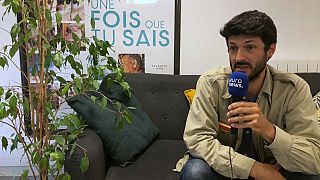 With a variety of films on climate change, the internationally renowned cinematographer and documentary filmmaker Emmanuel Cappellin knew he had to step up his game for the production of his latest documentary if he wanted to stand out from the crowd.

The French director met with the world's leading climatologists for "Once You Know", a profound and personal exploration of what it means to wake up to the truth about climate change and its future impacts.

"On the climate and energy issues, it's clear that we have passed thresholds and that we will experience inevitable things. So we have to make a distinction between things that are still avoidable, and making a film today makes sense because, as Hervé le Treut, one of the great French climatologists, says, 'It's the human dimension that will really give it all its terror, and our capacity for resilience in this climate story'," Emmanuel Cappellin told Euronews.

People will therefore have to find alternative solutions and sustainable models of life if they want to reverse energy depletion and move towards reasonable growth to avoid a collapse of our society.

40 years ago, the Meadows report, also known as The Limits to Growth, was already highlighting the importance of limiting growth to avoid the worst in the near future.

"What's important is to understand, and this is what I am trying to say with this film: the underlying mechanisms, meaning that in fact, we are all kings followed by our energy slaves. In fact, the real question is a question of energy if we want to talk about climate."

The documentary will be screened in cinemas in France and all over Europe from September 22, and will also be released in the United States later this month.