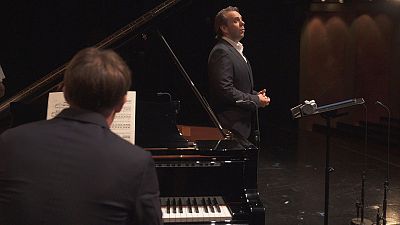 The pearls of romantic classics performed by French tenor Benjamin Bernheim captivated the audience at the Salzburg Festival.

Bernheim's recital was accompanied by Mathieu Pordoy on the piano and the performance expertly showed the tenor's range. He bared his heart with an array of German, English and French art songs.

'Poème de l’amour et de la mer' was originally a song cycle for voice and orchestra. It was composed over several years during the 1880s and was dedicated by Chausson to Henri Duparc, a French composer from the late romantic period.

The tenor told euronews that "Chausson allows us to experience the stages of life's loves" with this song. Chausson musically described the beginning of love, the creation, the discovery until the end, represented by the lyrics: "when the lilacs will not return". To Bernheim, this depiction of love is "something that's very strong."

In regards to the nature of the music performed, Pordoy describes himself as someone sensitive to romanticism. He thinks that it may seem old-fashioned in today's world to take the time to think about yourself, your feelings, but to him, that is the heart of romanticism. He is sure that still speaks to people.

To Bernheim, romanticism is bitter sweet. It describes the pain and hurt related to love, not just the well-presented aspects of the emotions.

The nature of a recital

The intimate atmosphere of a recital is created by the magical bond woven between the singer, the pianist and the audience and this can be a challenge for the artists. Pordoy said that the hardest part of it all "is standing in front of the audience, telling your stories without the orchestra's protection, without the protection of the set, without the props."

Bernheim feels this too. He told us that what the artists have to do is huge, "both of us are really exposed. It can actually be scary", he added. But they both agree lightheartedly that neither of them is susceptible to this fear.

The festival is an annual event that lasts five weeks during summer. This year it runs until the 31st of August.

There is something in Salzburg that gives us, the singers, the artists, a kind of legitimacy

Bernheim made his debut at the Salzburg Festival in 2012 under the direction of William Christie as Agenore in Il re pastore by Mozart. However, it is Pordoy's debut at Salzburg.

Bernheim describes the city, not just the festival, as "a place that breathes music all year round". To him and many others, it's a place where you can really feel the melodies vibrating, no matter where you are.