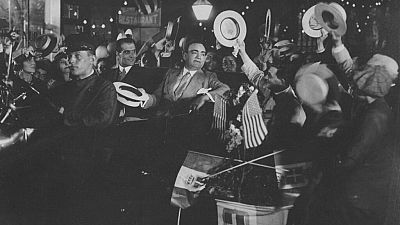 For the first time ever, the legendary Enrico Caruso has appeared on film in both sound and vision.

A hundred years after his death, images of the great Neapolitan tenor have been reunited with his voice by the Cineteca di Bologna in a restoration of the 1918 film "My Cousin" - the only surviving film of an originally silent pair in which he appeared.

For film buffs and fans of Caruso it is being seen as an extraordinary project.

"We discovered that the film existed and it seems that many of the scholars and lovers of Caruso were not aware of the fact that he had been an actor in a Fiction film, which is called 'My Cousin'."

In the film, originally from 1918, we can see and hear Enrico Caruso sing the celebrated aria Vesti la giubba - better known as Ridi, pagliaccio, from Ruggero Leoncavallo's Pagliacci.

Musccio says: "It was possible to synchronise and it's a marvellous experience because you can actually see Caruso singing this aria which, you know, was the first record that sold 1 million copies ever in the World.

"Caruso is the first media star, he was very popular at this time. He was in the press , in the newsreels."

In a strange parallel with modern times, the original release of 'My Cousin' was postponed due to the outbreak of Spanish Flu pandemic.

But this restoration helps us see the legend as he was meant to be experienced.

Italy brings the curtain down on state censorship of films