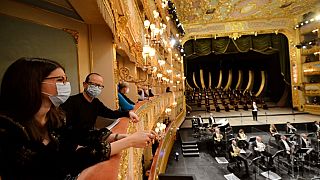 On Monday evening, La Fenice Opera theater in Venice welcomed back spectators by raising the curtain on the concert "Verdi and La Fenice," attended by an audience only of youngsters people aged between 18 and 30, with tickets at the symbolic price of two euros, in order to bring young people closer to music.

Cinemas, theatres and concert halls in Italy can once again welcome the public with 50 percent capacity.

The country hopes to regain a semblance of normality after months of alternating between drastic closures and timid openings due to the pandemic.

Tourists and locals alike returned to the Colosseum in Rome on Tuesday after the iconic site reopened its doors after a six-week closure because of coronavirus restrictions.

The ancient arena for Roman gladiators had been shut for 41 days due to government measures to counter the spread of COVID-19.

Measures including thermo scanners, disinfectant dispensers, one-way paths and a limited on the number of visitors have now been put in place in order to make sure that people can visit the site safely.

About 400 people visited on the first day of reopening on Tuesday, far fewer than the 20,000 visitors who flocked daily to the site in 2019.

The maximum number of visitors currently allowed is 1,260 per day.