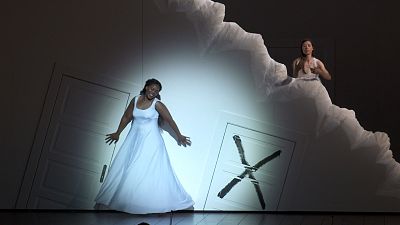 'La Sonnambula' premiered in Milan's Teatro Carcano in 1831. The opera tells the tale of Amina who sleepwalks into another man's room causing a scandal with her lover Elvino.

Bellini's original opera has a happy ending with Elvino eventually accepting that Amina innocently sleepwalked into the other man's room, but other interpretations including Villazón's end on more sinister notes.

"If you look at her story, you can see that it's very hard for society to accept purity, goodness and free-spirited beings", Pretty Yende explains. "characters like Amina, are a reminder of how we as human beings are born to be free and to love and to fly".

Villazón echoes this understanding of the character saying "when she's in the somnambulist state, she's completely free".

I love the light in her. I love the sincerity in her that I aspire for

The new production brought to life by Villazón is set in an extremely strict society. He describes it as "a community that has very strong rules". To visually represent that, he created "a minimalist space", where a sort of closed village is symbolised by walls. It has a "cold ambiance", he adds.

Bel Canto is a style of operatic singing originating in Italy in the late 16th century. It uses a relatively small dynamic range and requires precise control of vocal tone intensity. It is characterised by vocal agility, clear notes and a good enunciation of words.

The style almost entirely disappeared by the start of the 20th century due to trends. Heavier, dramatic singing was the preferred fashion by then. However, by the late 1900s, it reappeared with the revival of operas like Vincenzo Bellini's whose style particularly captures the technique.

The Concept of Sleepwalking

At the period when Bellini composed 'La Sonnambula', the idea of sleepwalking was new and exciting. Someone moving around unconsciously in their sleep was unheard of and a woman moving into another man's bed was unimaginable.

These two elements combined made the plot a sensation at the time.

Villazón tells us that what somnambulism in this opera tells us is that "this world of the subconscious and this awakening is chaotic, free, joyous and also a dangerous world".

Tenor, Francesco Demuro, who plays the role of Elvino, describes the aria 'ah! Perchè non posso odiarti?' (Ah! Why cannot I despise you?) as "an extremely difficult passage because in that very moment you have to sing with intensity and let the music transport you".

'Ah! Perchè non posso odiarti?', as its name suggests, is the aria that accompanies Elvino's continued rejection of Amina despite the townspeople backing her story. It describes his inner anguish at still loving her despite his belief that she has been unfaithful.

It's an inner anguish that is also felt by Amina. Yende tells us that Amina at this point is "so tender-hearted and she says: 'Gran Dio, don't you see my pain? You know, I forgive him and even if I'm not so happy, I want him to be happy'."

Rolando Villazón's interpretation of 'La Sonnambula' will play at the Théâtre des Champs Elysees in Paris until the 26th of June.