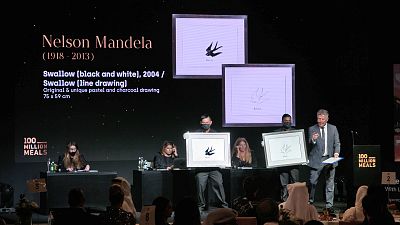 An auction of artworks in Dubai, which included pieces from Pablo Picasso, Salvador Dali, and Nelson Mandela, has raised €8.2 million for charity.

The event, held at the Mandarin Oriental Jumeirah hotel on April 24, saw art-loving philanthropists dig deep into their pockets to support the 100 Million Meals campaign.

The initiative is the biggest food drive in the MENA region and, as its name suggests, aims to provide 100 million meals for disadvantaged individuals and families in 20 different countries.

The auction was streamed live online and bidding was also carried out remotely.

As well as works from legendary artists pieces from iconic individuals not best known for their artistry were featured in the action.

Two works by Mandela titled Swallow (black and white) and Swallow (line drawing) sold at the auction for €223,000.

The former president of South Africa took inspiration from swallows whilst imprisoned on Robben Island, in Cape Town, South Africa — he would look up to the sky and reflect on the fact that only the birds were free.

Also featured in the auction was a piece from one of the most celebrated artists of all time, Spanish surrealist Salvador Dali.

Pablo Picasso was one of the most influential artists of the 20th century and his masterpieces are some of the most notable in history.

The lot up for auction was made up of seven medallions in 23-carat gold, which were created in 1956.

Picasso worked in collaboration with goldsmith Francois Hugo to produce them and they had remained in a private collection until the sale.

Pablo Picasso's great-grandson, Florian Picasso, was present at the auction to see the fruits of his great-grandfather's work auctioned off.

One of the highlights of the evening was the auction of a piece from the private collection of Sheikh Mohammad Bin Rashid Al Maktoum, Vice President and Prime Minister of UAE and Ruler of Dubai.

He donated the Kiswa, which raised €2.2 million for the 100 Million Meals initiative.

British artist Sacha Jafri who is a Dubai resident and holds the Guinness World Record for 'the Largest Art Canvas in the World raised the most money on the night with one part of his "The Journey of Humanity" painting selling for almost €3.5m.

A selection of other notable pieces went under the hammer at the event: David Hockney's paintings "The Sailor" and "In Front of House Looking West" were up for grabs alongside "Untitled" and "Personages, Oiseau" paintings by Joan Miró and "Fleurs dans un vase" by French artist Henri Matisse.

Mohammed bin Rashid Al Maktoum Global Initiatives, the foundation behind the campaign, set a target of raising €22.5 million for 100 Million Meals, which it achieved.

The United Nations set the goal of ending all forms of hunger and malnutrition by 2030, making sure all people — especially children — have sufficient and nutritious food all year.