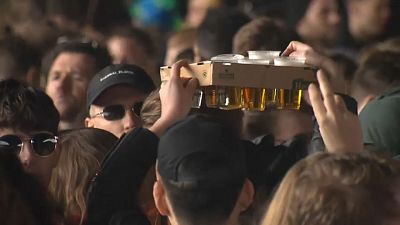 It has been one year since people in the Netherlands have been allowed to drink, dance and party in the same space - but that could soon be set to change.

The Dutch government is conducting a range of tests to find out whether large-scale events can be held safely in the age of COVID-19 with the help of a new phone app.

The village of Biddinghuizen hosted the latest experiment where around 3000 people were given the green light to sing, dance and generally enjoy themselves.

The catch? Participants had to be tested for the virus prior to the event and provide proof of a negative result upon entry. The result was then loaded onto the CoronaCheck app via a QR-code.

People involved in the six earlier fieldlab events showed their negative test results via a digital or paper document, together with ID. CoronaCheck combines the two.

Festival-goers partied in three groups, with each person given a device to monitor his or her movements and contacts.

It recorded who the user had contact with, for how long and at what distance. The researchers will try to deduce an average number of contacts from the data.

The final fieldlab results are due to be published in April.