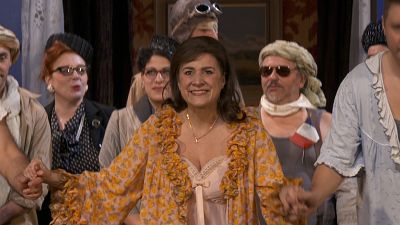 Cecilia Bartoli and the Opéra de Monte-Carlo have a long-lasting love affair. Together they recently mesmerised audiences in the Garnier Hall with Rossini's final comic opera, “Le Comte Ory”. Bartoli's busy schedule includes stage performances, pulling the strings behind the scenes and now preparing for a new role. In 2023, the legendary mezzo-soprano will become the Opera de Monte-Carlo's new artistic director, the first woman to have this honour.

Jean-Louis Grinda is the current director of the Opera de Monte-Carlo. He describes Bartoli as a "legend". They're "appointing a woman who is extraordinarily skilled, an artist who has left her mark on the history of the opera".

Cecilia Bartoli is the daughter of a singing teacher. She made her debut in Rome in 1987 as Rosina in Rossini’s The Barber of Seville. Her talent was immediately recognised and she has now performed in countless locations across the globe, including Salzburg, the Metropolitan Opera New York, London’s Royal Opera House and many more.

She has five Grammys and over a dozen Echos and Brit Awards. Her hard work is described by Moshe Leiser, stage director at the Opéra de Monte-Carlo, as "going above and beyond". This is maybe one reason why she has won the Polar Music Prize, the Léonie-Sonning-Music Prize and the Herbert von Karajan Prize. Or perhaps she's been so successful because of her passion for her work that stage director, Patrice Caurier, says "she dedicates all her energy to".

Cecilia Bartoli herself says her desire was only "to make music together with other musicians". She started off slowly by learning the piano and then some trumpet. She tells us that she never imagined becoming an artistic director, it was a great surprise to her.

Her new artistic home is an architectural jewel by Charles Garnier, the designer of the Paris Opera. It's a place that she calls magical and "acoustically incredible". All the greatest singers, past and present, have sung there, like Caruso, Beniamino Gigli and Tebaldi. Bartoli tells us it makes "the history of the theatre really important".

As for choosing this iconic Mezzo-Soprano as the new artistic director, Jean-Louis Grinda simply says he's "convinced that opera houses should be run by artists. Artists understand all that’s at stake in theatres and artists know how to take these risks".

Some of Bartoli's aspirations for her new position include inviting artists who have never had the chance to perform at the Opera house to sing there. She would also like to "open a door to the world of Baroque and Mozart".

She hopes to start this new position by continuing "with a lot of energy and love" because, as she says, "in the end that's what it's all about".