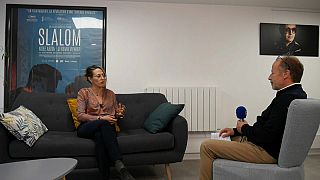 Sexual harassment in sport is not often the focus of films, but Slalom, the first feature by Frenchwoman Charlène Favier, aims to change that.

It is the semi-autobiographical story of a young sportswoman who falls under the control of her coach seeing him try to dominate her mentally and physically.

"In this film, it was really the idea of finally working on the coach-trainer relationship," Favier told Euronews.

"I wanted to deal with all its ambiguities, all its contradictions, without ever caricaturing things, in the way I knit the possessive relationship. It's something she didn't want, but at 15 you don't know what you want," she added.

The film, 8 years in the making, had been selected in the Official Selection of the Cannes Film Festival 2020, which did not take place.

Favier said she does not want to ride the #MeToo movement with the film, but to put the audience in the shoes of an inexperienced teenager.

"I absolutely wanted this film to be an emotional and sensory journey," the director said. "I think it's a very good way to involve the viewer in the story. I didn't want to use an analytical discourse at all, nor to judge my characters."

A core part of the film was to make the viewer feel empathy towards the main character. "I wanted us to feel everything she is going to experience and that at the end of the film, we ask ourselves a very simple question: What happened? So that the debate could open up so that people could speak freely, that was really the idea of the film," Favier said.

The film has been screened at numerous festivals and been met with public and critical success. It will be released in Europe as soon as cinemas reopen.

The films in 2020 that battled the pandemic

A look back at COVID-19's impact on European film festivals