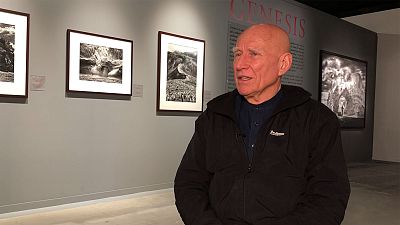 The famous Brazilian photographer Sebastião Salgado’s exhibition Genesis is on show at La Sucrière de Lyon, a former warehouse that has now become an exhibition space.

Genesis is a photographic tribute to the planet comprising more than 200 black and white photographs. It's the result of eight years work and some thirty trips around the world.

Raised on a farm in Brazil, Salgado has a deep love and respect for nature. But he's also particularly sensitive to the ways in which human beings are affected by their often-devastating socio-economic conditions.

He has produced numerous works over a career spanning many decades, such as the long-term project Workers (1993) which documented the vanishing way of life of manual labourers across the world. Or Migrations (2000) - a tribute to mass migration driven by hunger, natural disasters, environmental degradation and demographic pressure. And then Genesis, his “love letter to the planet”.

This exhibition is the result of an epic eight-year expedition to rediscover mountains, deserts, oceans, and the animals and peoples that have so far escaped the imprint of modern society. It depicts the land and life of a still-pristine planet. This project, along with the Salgados’ Instituto Terra, are dedicated to showing the beauty of our planet, reversing the damage done to it, and preserving it for the future.

Mankind, he's an animal of this earth, an animal like any other, we're in the animal kingdom.

Salgado travelled by foot, light aircraft, seagoing vessels, canoes, and even balloons, through extreme heat and cold and in sometimes dangerous conditions to create a collection of images showing nature, animals, and indigenous peoples in breath-taking beauty.

Using only black-and-white photography, he has created a visual ensemble with such an extreme precision, that even the smallest details seem to infinitely develop.

"You know, when you look at an exhibition like Genesis, it's really the earth, the animals connected to the earth and also Man" explains Sebastião Salgado. "I'm still taking photographs of humankind. I've just finished seven years working in the Amazon with indigenous communities. Mankind, he's an animal of this earth, an animal like any other, we're in the animal kingdom."

Black and white photography has become the photographer's trademark. He explains why he decided not to use colour photography.

If the environment is now on everybody’s radar, for Salgado, little has changed. He believes Mankind needs to go back to nature and make a spiritual return to the planet. He says efforts so far to save the planet have been resoundingly unsuccessful.

"We have COP 21 that took place in Paris five years ago and despite everything that was put forward, nothing was done," he says. "Do you know why? Because we don't invite real people, we don't invite people who are linked to the earth, to the planet, it's a meeting of urban people."

The Amazon remains his favorite territory. With his wife Leila, who is also the curator of 'Genesis, he took on a colossal challenge 20 years ago. He decided to replant the trees that had disappeared from the 750 hectares of his father’s former farm. He wanted to revive the ecosystem in a region hit by deforestation and intensive land use.

"We planted 2.5 million trees, even a little more maybe 2.7 million trees and we are now preparing to plant one million more trees, in addition to those already planted," he explains. "Because, you know, before the land was tired, dead, destroyed and now the land is rich again. It's time to plant trees that will be there for 500 years, 1,000 years, trees that need good soil, and shade to grow."

Sebastião Salgado is now 76-years-old, but continues to work tirelessly on both his art and his own individual battles.

Genesis is in Lyon until the 10th of May.