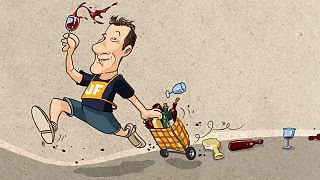 Playing pool, watching comedy, and performing karaoke. These are some of the activities many Europeans do while drinking alcohol.

Athletic exertion is not one of them.

However, in recent years, more and more races have popped up across Europe that involve both running and drinking - at the same time.

Marathons in traditional wine heartlands like Bordeaux and Beaujolais have been running for decades but in recent years, many more races have popped up across the continent such as the Genusslauf in Germany, the Forges of the Anlier Forest in Belgium and now the new kid on the block - the Marathon of Flavours in Switzerland.

Most races of this sort require a medical certificate, so I popped down to my local doctor, had my blood pressure taken, jumped up and down a bit, and was duly awarded one.

A little early for wine

At 9 a.m. I'm queuing for my bib in the picturesque Swiss town of Sion. It's the inaugural edition of the Marathon des Saveurs.

It's pouring hard, overcast and I'm severely underdressed in my running top and shorts. Looking around, many people are sensibly robed, as if they're here for a hike. And perhaps they are. This is the point where I begin to think it's not really a race.

Once out of the centre of Sion we climb a few hundred metres into the hills and run on narrow paths alongside tiny irrigation canals called 'bisses', some of which date back to the 13th century.

These man-made streams have been vital to the survival of farmland and viticulture in the area since the dark ages. The rain has not stopped and so I put my foot down and overtake a few people to warm up.

By 10:30 I'm drenched and the sight of a small marquee in the distance heralds the first 'tasting stop' - and it's a mixed blessing. Shelter from the rain is very welcome, as are the friendly faces telling us what is on offer. And though it's a little early for wine, I figure I should throw myself into the fray to get the full experience.

I'm given a white wine called Fendant, which is actually Chasselas - Switzerland's most widely grown indigenous grape. They have special names for grapes in the Valais - more of which later. It has a slight fizz on the tongue, which is a surprise. It's not a tasting glass either, it's a full wine glass. Same with the red that follows, which is called Dole. It dawns on me we're going to drink around three bottles' worth. There's food, too, of course. The organisers won't let you drink on an empty stomach. A platter of meat and cheese is the fare here. I have a chat with a couple of other competitors and everyone is in good spirits. I wonder if everyone will be drunk in an hour or so?

Rèze and Cornalin are very old varietals (which is a terribly sophisticated word for grape types). Records of these two wines date back to the middle ages and the irrigation canals. We're served these, along with some delicious pumpkin soup, in the garden of some kind of traditional farm house.

The party is in full swing with some hilarious accordion music and the first glimpse of sunshine. I'm nearly 10k in, and I'm starting to really enjoy myself.

It's between stops two and three that I really begin to notice that I'm overtaking a lot of people. I heard a few competitors say they were feeling a little light-headed while we were enjoying the Cornalin, and it made me wonder when my body would start feeling the effects.

It's common knowledge that Alcohol is a diuretic (something that will dehydrate you).

"Staying well hydrated is absolutely key in races such as the 23k," Dr Chris Gaffney, Lecturer in Sports Science at Lancaster University tells me. "When we exercise our core body temperature increases and you sweat to dissipate this heat. If you consume alcohol during exercise then the body is getting rid of fluid necessary to try and maintain our body temperature. Thus, we are stopping the body from regulating temperature normally."

Dehydration is something I was aware of as someone who runs regularly, and I was carrying a three litre water bladder in my backpack for the run. What I didn't know was other, quite startling, considerations that Dr Chris made me aware of. Cardiovascular and metabolic considerations for example.

"Drinking alcohol effects the electrical activity of our heart. This can lead to an increase in heart rate, an increase in blood pressure, and an increased frequency of abnormal heart rhythms. These can be dangerous during exercise where the heart is already under increased demand."

He goes on: "Over 90% of alcohol is broken down in the liver. The processing of alcohol may impair the liver’s ability to detoxify other metabolites during exercise, and the accumulation of some metabolites can be bad for our health."

It's not hitting me yet and I'm still happily running through vineyards.

The promise of hot cheese leads me to run quite quickly to this, the third tasting station. A glass of Muscat is a sweet kick upon arrival as is the stereo system which is pumping out AC/DC's Highway to Hell, a fitting tribute to those struggling with the alcohol. Then comes the Humagne Rouge, which pairs stupendously with the bubbling raclette. I'm sure I'm not drunk. But then again, I am singing.

It's at this point I start to sniff victory. I am told there's only one group of runners that have already passed this way, eaten, drank and left. I decided it was game on so I declined the second plate of raclette and headed off.

After about two kilometres I could see runners in the distance. That gave me something to aim for. Soon, I'm gaining on them and feel really good.

Could it be that my fairly regular drinking habits have given me an advantage?

Gaffney seems to think so. He highlights the two elements that support the theory - genetics and what he terms the 'training' effect.

"You may be biologically advantaged through being male and having genetics that predispose to efficient breakdown of alcohol. You will further be advantaged through possessing greater quantities of enzymes in the liver to break down this alcohol that you’ve gained from frequent drinking.

I had been running solo for about 20 minutes by the time I reached the penultimate tasting station. Nobody was there aside from the guys running the food and drink stall. Did I just miss the frontrunners? Yes, they tell me. By about 5 minutes.

I can't just swig two glasses of wine, wolf down the game terrine and scuttle off. I have to do this properly.

Much like Fendant is the special Valais name for the ubiquitous Chasselas, similarly Johannisberg is really Sylvaner. These fantasy names are romantic and truly make one feel like you've entered into an entirely new world of wine. And you kind of have.

The Valais is the same size as Bordeaux's St Emilion region. That's about 5,000 hectares. Wine-wise, that's not particularly huge.

A day before the race I went to visit one of Switzerland's flagship wine estates, Domaine du Mont d'Or. Laurent Guidoux, who runs the operation, gave me a tour of the vineyards and we discussed the singular problem that is how to export Swiss wine.

"99% of Swiss wine never leaves the country," he says. "And the cost of production is too high to have prices that are interesting to supermarkets."

A wine without a profile isn't going to intrigue buyers, especially at a high price. And Guidoux has overheads that push the price point beyond an easy sell. But the quality does make the wine from the Valais competitive.

Their Petite Arvine is remarkable. There's an unmistakable saline finish that sets it apart from any other white I've ever tasted. A total shoe-in for a blind tasting. Nevertheless, he's facing a serious problem. The sort of problem that closes vineyards. Guidoux has the means to ride it out, but not every producer does.

Back to the race, and it's getting hot. I start running with a guy called Gerald and his mate. Gerald thinks we might win but I tell him I was told we're not the leaders. I then speed off, which proves foolish as while I'm running and filming a local man waving to me, I miss a signpost and take myself about half a kilometre the wrong way. It's only when I come to a crossroads with no signpost that I realise my mistake.

By the time I reroute myself, Gerald is a spot in the distance and I've got some running to do.

Eventually, after about two kilometres, I catch up. I still have a little water left in my bladder pack but I'm swigging quite heavily now. Gerald says he feels "very good" and it makes me laugh. Soon we come to "Raspille Gorge", the fifth and final tasting stop. It's dessert. Strudel with grape seeds served with Plum sorbet.

The dessert wine that goes with it, an overmaturated Hermitage, is exceptionally decent. The grapes that make this are not harvested until December, giving them more time to sweeten.

It's at this time an official gives me the news that there are two runners ahead and they left a few minutes ago. I'm not going to win this. At that moment, another couple get to Stop 5, and carry on through without stopping to drink. No, you don't, I think to myself. I down the wine, finish off the strudel and thank the volunteers. Gerald and chum are not quite ready so I wave and hit the final stage.

As I run up a hill and overtake the non-drinking couple, I ask myself if I'm drunk. I really don't think so. I don't feel unsteady and haven't the whole time.

"Alcohol affects the density of fluid within the inner ear, which sets off a cascade of signals to the brain which can result in feeling unsteady on our feet and even falling," Dr Gaffney notes in his advice to me. "This is compounded by the effect on the oculomotor (eye movement) system. This happens because alcohol affects the central nervous system and changes our eye movement patterns so they are less effective. This could pose dangers when running, particularly on uneven ground. In brief, if we consume (enough) alcohol we become unsteady on our feet and this is usually bad for exercise."

Legendary Clash frontman Joe Strummer reportedly ran a marathon in 3 hours 20 mins. According to various sources it was the Paris marathon of 1982. His advice on preparation? “Drink 10 pints of beer the night before the race."

No cheering crowds, in fact no-one at all is there to witness me finish. Initially I worry I've got the wrong place, but once into a courtyard I see two officials having a glass of wine and a chat, so I head towards them. I sign to say I have completed the race and they tell me that I have come third.

A man comes over from the bar area to say that, since there's no actual podium, would I like a congratulatory drink. I gladly accept. Well, I'm not made of stone.