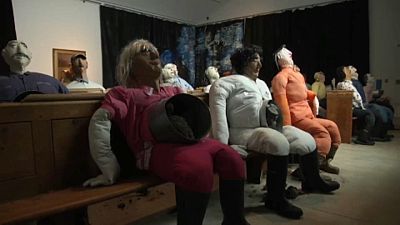 Rows of workers staring out to sea, but their view - of the water and the European continent beyond - is blocked. Only a small tear in the black canvas lets them peak through.

This work, by Colombian artist Oscar Murillo, is one of four shortlisted entries to Britain's prestigious annual Turner Prize.

Founded in 1984 it is given annually to an artist residing in Britain or British born but living elsewhere.

The prize often sparks heated debate about the value of modern art. This year's offering is likely to be no exception.

"For this exhibition, he (Murillo) particularly wanted to focus on the social and political situation in the UK at the moment," explains curator Fiona Parry.

"So, he's intentionally blocked out the view out to the North Sea, sort of outward-looking view, with this enormous black canvas. To basically represent the darkness of this contemporary moment in the UK and globally.

Murillo's work focuses on the political and socio-economic moment in the UK. The group of papier mache figures represent a globalised workforce, while the black cloth represents the "darkness of the contemporary moment".

Another entry, London-based Tai Shani has created a dark, fantastical world. It takes inspiration from Christine de Pizan's 15th century feminist text "The Book of the City of Ladies".

The work, called "DC: Semiramis", is a combination of performance, film, installation and sculpture. It's part of a four-year project by the artist.

"It's to challenge all of the preconceptions or the ideas we have about the construction of society, around patriarchal values and that same history," explains curator Rowan Geddis.

Last year, all four Turner Prize shortlisted artists used video in their work and this year three have.

Most notably, artist Helen Cammock whose film "A Long Note" examines the overlooked role of women in the civil rights movement in Londonderry, Northern Ireland that began in 1968. It connects to broader global class, race and gender struggles globally during the late 1960s.

"Performance is also a big part of this year's show, so a lot of the artists will be doing performances in some form or another," said Parry.

"So, it's very diverse, but also very political and I think there's a lot of content to get involved with."

He looks into the horrific appearing conditions in the Syrian regime prison of Saydnaya, outside Damascus.

The winner of the Turner Prize 2019 will be announced at a ceremony on 3 December.

All works will be exhibited at Margate's Turner Contemporary gallery, 28 September - 12 January 2020.