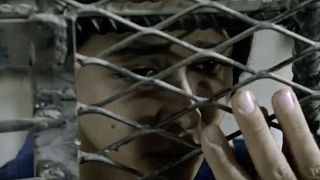 A Palestinian filmmaker who has directed more than eight films over 30 years, she focuses on the struggles of her home country and Lebanon.

“You can tell a story in a more powerful way when you show intimate daily life,” she said, after describing a scene from her 2015 feature ‘3000 Nights,’ which depicts the struggles of a Palestinian schoolteacher who is forced to give birth in an Israeli prison, based on the true experiences of a woman Masri met.

She used the sounds of clanking chains, distant footsteps, and a child crying, instead of music, to convey the torment of being trapped in a prison for years.

A wooden toy bird belonging to the main character's son served as a metaphor for her desire for freedom, while the prison itself was intended to show the environment many Palestinians lived in on their own land, Masri said.

“From the raw, create poetry,” she said, adding that conveying the feeling of suffering through art is more effective than hitting viewers with hard facts that are often dry.

“You lose your audience when you hammer them over the head,” said Masri, who was awarded the career achievement award at the third edition of the El Gouna Film festival, where she shared her experiences of filmmaking in conflict zones in a discussion event called "A Documentary Journey.”

She talked about shooting in restricted areas, the responsibility documentarians have to accurately convey the voice of their characters, and also the importance of allowing the situation, and the people you are filming to direct you.

“What’s your advice for my generation?” asked Hassan Amin, a student in his final year of cinematography at Cairo’s High Cinema Institute.

“People are not moved or changed by reports anymore. When they see massacres or police brutality they (just go on) eating their lunch,” he continued, asking Masri, how she creates cinema rather than reports that actually speak to people.

Masri shared her experience of returning to Nablus, a city in the northern West Bank, in 1989 for the first time in over a decade during the first Intifada — the Palestinian uprising against Israeli occupation of Gaza and the West Bank. Masri said she was one of the few people there, and the only woman, to bring a camera and show the suffering that took place there, which had an impact on viewers.

“They didn’t want the world to see what was going on,” said Masri. “It’s empowering, it’s like a weapon of expression, of resistance,” she added.

Masri said her trilogy about Palestinian refugee camps in Lebanon was aired on the US Public Broadcasting Service and generated hundreds of letters from American viewers. In addition, she said a Japanese jazz artist started a fund donating musical instruments to children in the Shatila camp after watching her film.

“Cinema is an international language,” she said, which was also true of the array of films from across the globe that were showcased in the El Gouna Festival’s feature documentary competition.

The contest included 12 reality-based features including "Kabul, City in the Wind," which brings viewers into the intimate conversations of residents in the war-torn country Afghanistan during the silent intervals between bombings. While "Untouchable" from director Ursula Macfarlane portrays the rise and fall of American film producer Harvey Weinstein in the wake of the #MeToo movement.

For Mexican filmmaker Chantale Anguiano, producer of the short film "Nightcrawlers" that was showcased at the festival, making a successful documentary requires empathy.

Like Masri, she believes transmitting emotion through art is what a documentary filmmaker needs to do to create stimulating cinema, as well as “the right philosophy (and) the right approach”.