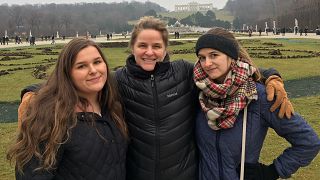 This essay was originally published on Pepperdine University Graphic.

At first, the doctors said it was pneumonia.

On the way back from the hospital two days before her death, my mother groaned between coughs, "I'm never smoking again; I'm throwing out all of my e-cigarettes and weed pens."

This was a groundbreaking statement from my mother, who,like many, had embraced vaping as an alternative to smoking with swift, open arms. Despite recent protests from loved ones, she was adamant for years that it was far healthier than her cigarette habit. Having always believed marijuana was not a dangerous drug to consume, Mom began to vape THC products in late 2018 — not long afterCalifornia legalized the drug for recreational use.

If I knew my mother, she would try to move mountains before she would declare she was quitting either drug. It's easy to assume just how much pain she was in to say this.

My father, a doctor who is all too familiar with the dangers of vaping, responded to her declaration of quitting by saying, "Good, Mary. There are some things that are precious, like your vision and your breath, and you just can't hurt those things."

"Breath is precious," my mom repeated.

On Friday, Sept. 6, my father found her blue in the lips, struggling for such precious air but unable to grasp it. She had most likely suffered for hours. Her death came swiftly after.

Later, X-rays revealed a white substance infiltrating her lungs, clouds as silky as the puffs of vape she would exhale. Those clouds weren't there when she had an X-ray two days before her death; they had developed as rapidly as an unexpected thunderstorm, unleashing an onslaught of destruction on her system and ultimately killing her. Relentless. No mercy given.

These X-rays confirmed what my family had feared; this wasn't a simple case of pneumonia, this was thenew vaping illness sweeping the nation with fury. The white substance in her lungs was one of manysymptoms associated with this new disease. Just as many others had, she suffered from nausea, vomiting and diarrhea. Other symptoms reported are coughing, shortness of breath and chest pain.

When Mom died, my father immediately requested an autopsy to confirm our suspicions. The deputy coroner working on the night of her death said in response, "An autopsy is not in the budget unless it's requested by the GBI [Georgia Bureau of Investigation]."

"Well," my father responded, "I think this is one that needs to be investigated."

Dad began to explain my mother's death in the way he would repeat until it was practically ingrained in him: Mary Kerrie Davis took a trip to California in July. She vaped legal marijuana. She had a cough when she returned home. She developed what you could barely call pulmonary pneumonia, and she was an otherwise healthy woman; this is a sudden death that should be investigated. Yes, she also vaped nicotine for years.

The next day, Dad turned to a local Blairsville, Georgia sheriff. Again my father explained her death. The sheriff told him, "I don't see how her vaping in California is a crime in Union County."

Again, my father explained the vaping illness. With some pushing, the GBI performed their autopsy.

Everywhere we turned, the response was the same: Where was the crime? What are the mysterious circumstances? A Georgia judge my dad had contacted for advice said, "You know, in all my years of serving, I have never seen a death related to THC."

Then turning to the world of medicine, Dad reached out to my mother's primary care physician and close family friend. Agreeing that her death was concerning, he reached out to the Centers for Disease Control and Prevention, who in turn directed him to the Georgia Department of Health, who then advised that he file a report with poison control. We found ourselves at a standstill.

No one who my father contacted, whether it be law enforcement or medical professionals, seemed to be aware of the national vaping epidemic, aside from her primary care physician.

On Monday, Sept. 9, we got word that Mom's autopsy was complete, and the funeral home would pick her up the following day. At the same time, my family found incriminating messages on my mother's phone; she had been purchasing THC cartridges illegally in Georgia. We began to search the house and came across several cartridges. The next step was obvious: these needed to be tested. My father swiftly called a GBI officer he had known for some time; he told my father he would make some calls.

After this, my father called the GBI crime lab where they had taken Mom. He was put directly in contact with her medical examiner, where he expressed his concerns about vaping.

Hours passed. Impatience grew. My father, deciding instead to take matter into his own hands, then called the GBI office's tip line. He was directed to the North Georgia Drug Task Force, who immediately sent a Union County narcotics investigator to our home. The officer searched the cartridges we had accumulated, and with a shake of his head, told us, "Yeah, we've been having a lot of problems with this brand."

He took Mom's phone and the bag of cartridges, and for the first time since her death, my family felt accomplished.

On Tuesday, Sept. 10, the funeral home called us. "Our guy went to pick her up, but the GBI told us they wanted to keep her for further testing," they informed my dad.

"A blessing in disguise," my dad answered. "They're taking this seriously."

The next day, my father called the medical examiner again, curious about the extra tests they had performed. She told him that based on the phone call she received from my father from the day before, she decided to run more tests and take a few more biopsies; this came just hours after she informed the funeral home her body was ready to be cremated. This was an opportunity that we had almost missed.

How many people, particularly middle-aged women, are dead because of this disease and haven't been investigated?

Several days passed. As the death toll continued to rise and Georgia began to receive reports, my mother's death did not make headlines. On Sept. 16, the medical examiner reported to my father that it would take four months to confirm her cause of death, despite reports of vaping-related deaths growing in numbers.

Many times throughout the investigation, my tired father hung his head between his hands.

My mother was a middle-aged woman. At the age of 52, she was not exactly the demographic associated with the vaping disease: men with a median age of 19, according to a recent report by The Washington Post. Although adolescents do make up a large portion of e-cigarette users, 1 in 20 U.S. adults reported using e-cigarettes, according to a 2016 study.

How many people, particularly middle-aged women, are dead because of this disease and haven't been investigated?

A not-so-sudden rise of side effects

The side effects of the vaping disease are not new. In a survey, users of nicotine e-cigarettes reported 405 side effects, with 326 of those being negative, according to a 2014 study titled "Vaping and Health: What Do We Know about E-Cigarettes?." Such side effects included headaches and changes in appetite. The same study reported "various nicotine-related degradation products and other impurities in e-liquids and vapors," although it claimed that such impurities were so small, it did not affect human health.

Nicotine toxicity has been known to produce symptoms of nausea, vomiting and diarrhea. Various online forums report similar effects from vaping, dating as far back as 2012. Because vaping marijuana is a relatively new practice, researchers aren't yet sure of its side effects.

When the Union County Narcotics Officer first came to my family, he informed us that possession of THC cartridges is a felony in the state of Georgia due to its high amount of THC. In the eyes of the law, it is akin to heroin possession. On Sept. 11, Trump called toban flavored e-cigarette juices.

But is keeping marijuana illegal and banning vape oil really the right solution? We need more research and balanced regulation, and we need them to be swifter than this disease.

For theinaction of the government, my family pays the consequences. For the past decade, where was the research to tell my mother that no, actually,we don't know if vaping is healthy and that she should rethink that e-cigarette in favor of nicotine patches or medication? Where are the regulations that should have protected my mother's life from something as careless as a potential contamination in her marijuana pen?

This vape-borne disease spared us no time for goodbyes, I-love-yous or last words. All that my family is left with is anger for the inaction of local authorities and the government and a new understanding of the value of air.

In a hotly debated issue of e-cigarette and marijuana regulation, do not forget the lives that may be at stake. Always remember that breath is precious.