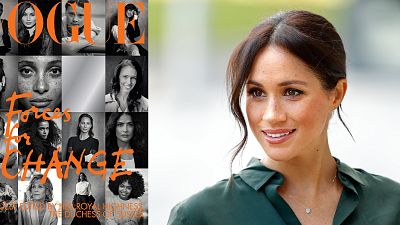 Meghan, Duchess of Sussex, is the surprise guest editor of the September edition of British Vogue, and it looks like she helped create a powerful issue that celebrates strong women.

For the September issue, which is traditionally the biggest of the year, the former Meghan Markle decided to focus on the theme "forces for change" and to interview women who break barriers.

One of the highlights of the issue is a candid conversation between former first lady Michelle Obamaand the duchess. Markle even gave her husband, Prince Harry, an assignment. The issue will feature an interview between the Duke of Sussex and Dr. Jane Goodall.

There are 15 women on the cover, but Markle isn't one of them. The duchess decided to focus on other women who are "forces for change."

It's been a labor of love seven months in the making.

In a statement, Markle said she was excited to "take the year's most read fashion issue and steer its focus to the values, causes and people making impact in the world today."

"Through this lens I hope you'll feel the strength of the collective in the diverse selection of women chosen for the cover as well as the team of support I called upon within the issue to help bring this to light," she said. "I hope readers feel as inspired as I do, by the 'Forces for Change' they'll find within these pages."

Now that the world has a sneak peek, they'll be able to pick up a copy of British Vogue on August 2. If you're not in the UK or near a newsstand that sells British Vogue, fear not: the magazine will be available for digital download the same day.

Clashes in Brussels as thousands protest at COVID restrictions

Portugal's PM joins in early voting ahead of general election

French adventurer dies attempting to row solo across the Atlantic