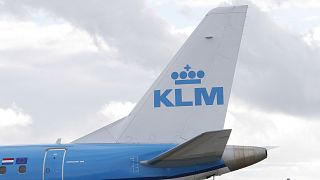 A logo sits on the tailfin of a passenger aircraft operated by KLM, the Dutch arm of Air France-KLM Group, at Munich airport in Munich, Germany, on Tuesday, Jan. 29, 2019. Deutsche Lufthansa AG has decided to speed up growth at Munich and develop it into   -   Copyright  Michaela Handrek-Rehle Bloomberg via Getty Images
By Rachel Paula Abrahamson  with TODAY Lifestyle  •  Updated: 25/07/2019

Shelby Angel was breastfeeding her daughter on a KLM flight from San Francisco to Amsterdam in June when a flight attendant approached her with a blanket.

"She told me (and I quote) 'If you want to continue doing the breastfeeding, you need to cover up,'" Angel wrote in a lengthy post on the KLM Royal Dutch Airlines Facebook page. "She then warned me that if anyone complained, it would be my issue to deal with."

Angel noted that no one had any issues.

When Angel contacted KLM to express her disgust over what occurred, she was allegedly told that she "needed to be respectful of people of other cultures" and that the employee's response "was in line with company policy."

Though the airline was inundated with criticism after Angel's post went viral, they aren't backing down on their stance.

Last week, when a woman tweeted at KLM asking their policy regarding nursing, the airline replied, "Breastfeeding is permitted at KLM flights. However, to ensure that all our passengers of all backgrounds feel comfortable on board, we may request a mother to cover herself while breastfeeding, should other passengers be offended by this."

In a follow-up tweet the KLM explained, "We absolutely don't want to make the mums of our youngest passengers feel judged about the most natural thing in the world. That is why our cabin crew may suggest options to the mums to ensure some privacy when feeding their child."

"I'm offended by people who are offended by breastfeeding. Can you put sacks over their heads for the duration of the flight please @KLM?" wrote one person. Added another, "Have you tried eating with a blanket over your head? I suppose next you'll suggest nursing in the bathroom."

But not everyone disagrees with KLM. "@KLM is correct," responded a nurse from Virginia. "As a woman and medical professional I have no problem with breastfeeding but asking women to just throw something like a burp cloth over them whilst doing so is not an unreasonable request."

TODAY reached out to KLM for comment but did not get a response.

Other airlines seized the opportunity to show their support for breastfeeding moms. As Easy Jet tweeted, "You can feed your baby on board at any time."