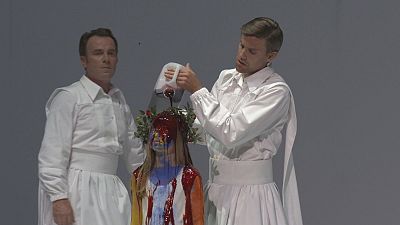 The director, Romeo Castellucci, and conductor, Raphaël Pichon, have torn up the rulebook with their interpretation of Mozart's mass for the dead.

"The Requiem is a work that is sung numerous times a day all around the world," explained Pichon. "It is a ritual that we carry out for the living, for those of us who remain, not for those who have departed. Romeo sees it much more as a celebration of life than a celebration of death."

Making her debut at the festival in Aix is Australian soprano, Siobhan Stagg.

"We work backwards through life," said Stagg, "beginning with a person at the end of her life on stage and then it proceeds to move backwards — we have a woman in her 20s, then a nine-year-old girl and finishing with a baby at the end. So we're thinking about death in reverse, thinking about the circle of life."

Siobhan explained that the work requires the cast to draw on all its talent.

"This production really demands everything of the people who are on stage, everything about them that is alive actually — that's the irony that Romeo really loves — that they're dancing and running and puffed out and exhausted by the end," she said.

The story behind Mozart's Requiem carries its own irony; the composer died halfway through his mass for the dead.

"Mozart spoke of death as one of his best friends," explained conductor Raphael Pichon. "We can perhaps sense in his final correspondence that Mozart had a kind of premonition about the fact that his health had deteriorated very quickly and so we could reasonably believe Mozart had this premonition, that this mass of the dead would become his own."

"It is the disappearance of beauty which makes it so beautiful."

Mozart passed away while composing the Lacrimosa movement and it is during this scene that the entire ensemble collapses in this production.

"The Lacrimosa — it has great nudity, a great fragility," said Pichon. "That which is beautiful must also be delicate, must also be perishable, must appear and disappear and it is the disappearance of beauty which makes it so beautiful."

"Imagine the soprano voice is the lightest and perhaps the most 'innocent' sounding in a sense and we like to think that when we're born and hopefully when we die as well — if you're religious — that we're innocent and cleansed of our wrongdoings, and that we go to a better place, peacefully and calmly. I guess he could have chosen that vocal colour for that reason."

The Festival Lyrique 2019 in Aix-en-Provence runs until July 22.