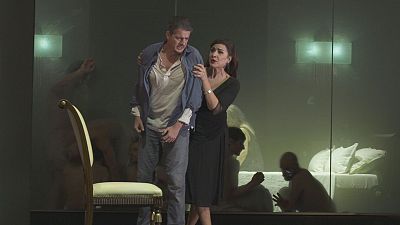 Illusion, manipulation and magic, Handel's opera 'Alcina' casts its spell on the Whitsun Festival in Salzburg.

At the heart of this enchanted world are Cecilia Bartoli and Philippe Jaroussky.

The Artistic Director and acclaimed mezzo-soprano Bartoli portrays Alcina who falls in love and loses her magical powers.

"This story of Alcina is really incredible, a sorceress who falls in love. This is completely forbidden. You have to show different colours, there is power, there is love and there's also the fact that she's aging," said Bartoli.

"There is sensuality and lightness, we can find all this in Handel's operas. Each aria has its own character, a different colour. Each masterpiece of Handel is a jewel, " she added.

Philippe Jaroussky, a Countertenor said, "Handel had a personlity that was severe, quite difficult to handle, a little bad tempered. We know that he even once threatened to throw a soprano out of the window. It was not a good idea to bother him too much."

"And then ironically his music has so much sensuality and humanity. The music of Handel is probably among the most touching in the history of music," he added.

Voci celesti - 'Heavenely Voices' is dedicated to this year's edition to castrato voices who inspired Handel and many other Baroque composers.

Handel wrote the role of Alcina's lover Ruggiero for a famous castrato. Today these roles are interpreted by a mezzo-soprano or a countertenor who uses his head voice.

Jaroussky said, "The particularity of a castrato was the breath, which was much deeper than average and gave them an incredible agility. They were able to do extremely long phrases with just one breath and this must have been part of the magic of these voices."

He added, "Some of the drama of their personal life could be heard in their voices. They probably felt a great injustice that they were deprived of their own physical integrity. I think the emotion in the voice of a castrato is connected to the technique they used but also to this special history."

"To sing was for them the way to survive", he added.

'Alcina' also features on the bill of the Salzburg Summer Festival, where it will be performed between 8 August - 18 August. The festival runs from 20 July to 31 August.

Another success for Cecilia Bartoli at the Whitsun Festival