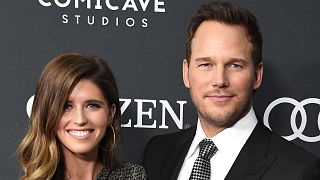 It's official — Chris Pratt and Katherine Schwarzenegger are officially married!

Both Pratt and Schwarzenegger shared the happy news with identical Instagram posts on Sunday confirming that they tied the knot in a romantic ceremony on Saturday surrounded by family and friends, including Katherine's parents, Arnold Schwarzenegger and Maria Shriver. Pratt's 6-year-old son, Jack, whom he shares with ex-wife Anna Faris, was also in attendance.

"Yesterday was the best day of our lives! We became husband and wife in front of God, our families and those we love. It was intimate, moving and emotional," the couple said. "We feel so blessed to begin this new chapter of our lives."

The ceremony took place at San Ysidro Ranch in Montecito, California, near Santa Barbara, E! News reported. The event had a romantic and personal vibe, with tons of flowers, greenery and separate tents set up for the ceremony and reception. The bride wore a custom gown by designer Giorgio Armani. Pratt commented that Armani also made him "the perfect suit."

Schwarzenegger's three siblings — Christopher, Patrick and Christina — were also in attendance, as was Rob Lowe, who attended with his sons Johnny and Matthew, People magazine reported.

After the ceremony, guests enjoyed cocktails on the lawn while a live band played. A light summer menu that included fresh vegetables was served to guests. Desserts were also seasonal and included raspberries and blueberries, according to People.

The couple, who began dating in the summer of 2018, announced their engagement on Instagram in January.

"Sweet Katherine, so happy you said yes!" Pratt captioned the very intimate photo of him and Schwarzenegger embracing with an engagement ring visible on her finger.

"I'm thrilled to be marrying you. Proud to live boldly in faith with you. Here we go!" Pratt added a diamond ring emoji, prayer hands and a heart, and the look on his face in the photo is one of total bliss.

Katherine posted the same photo with the caption, "My sweet love. Wouldn't want to live this life with anyone but you."

Pratt, 39, and Schwarzenegger, 29, first stepped out together as a couple on the red carpet in April for the premiere of Pratt's now-blockbuster film, "Avengers: Endgame."

Their romance came on the heels of Pratt's separation from Anna Faris in August 2017. The couple, who were married for eight years, filed for divorce in December that same year.

Pratt and Schwarzenegger had a well-documented whirlwind romance, splitting their time between Los Angeles and Pratt's farm in Washington state.

Congratulations to the happy couple!