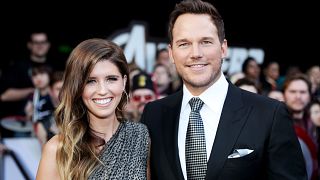 Chris Pratt and Katherine Schwarzenegger on Sunday announced their marriage on their respective Instagram accounts.

"Yesterday was the best day of our lives!," they each captioned a photo of them holding hands. "We became husband and wife in front of God, our families and those we love."

The pair, who began dating in the summer of 2018, said their wedding was "intimate, moving and emotional."

"We feel so blessed to begin this new chapter of our lives," reads the joint statement.

The bride and groom wore Giorgio Armani, whom they also thanked in their Instagram posts.

"This morning we feel nothing but blessed," they said.

Pratt and Schwarzenegger tied the knot in Montecito, California, on Saturday in front of close family and friends, according to People, including the bride's parents, Maria Shriver and Arnold Schwarzenegger.

Pratt, 39, rose to fame in NBC's series "Parks and Recreation." He has also starred in the "Guardians" and "Jurassic World" franchises.

Pratt was previously married to Anna Faris. They share a son together, Jack, 6, who was in attendance Saturday. Pratt and Faris announced their split in August 2017 and settled their divorce in November 2018.

Pratt proposed to Schwarzenegger in January.