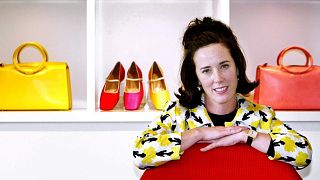 FILE - In this May 13, 2004 file photo, designer Kate Spade poses with handbags and shoes from her next collection in New York. Law enforcement officials say Tuesday, June 5, 2018, that New York fashion designer Kate Spade has been found dead in her apart   -   Copyright  Bebeto Matthews AP
By Gina Vivinetto  with TODAY Lifestyle  •  Updated: 06/06/2019

Kate Spade's famous family members honored her with heartfelt tributes on Wednesday, the one-year anniversary of her tragic death.

The late handbag designer, who died by suicide on June 5, 2018 at age 55 after years of battling depression and anxiety, was honored by her brother-in-law, comedian David Spade, and her niece, actress Rachel Brosnahan.

Former "Saturday Night Live" star Spade took to Instagram to share a photo of himself smiling next to the fashion icon, and added a red heart emoji to express his sentiments.

The funnyman's brother, Andy, was married to the designer for more than 24 years.

Brosnahan shared a photo of her aunt — who was born Katherine Brosnahan — in happier days.

On Christmas Eve last year, the actress, who now designs handbags herself, honored what would have been Kate Spade's 56th birthday by sharing a photo of her beaming in front of a candle-laden birthday cake.

According to People, on Wednesday the Kate Spade New York Foundation announced it had fulfilled its pledge to donate $1 million to support mental health services after it gave $200,000 to The Jed Foundation, which partners with schools to strengthen mental health programs.

The fashion brand said it would match public donations to JED from Wednesday through June 12, up to $100,000, at jedfoundation.org/katespade.

As part of its pledge, the foundation also donated to the Didi Hirsch Foundation, Fountain House and Crisis Text Line.