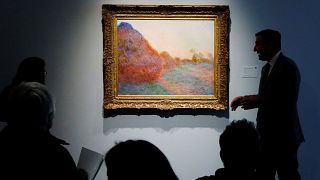 Out of the 25 paintings from the Haystacks series, four have been put on sale — Meules is the only one to have been put up for auction this century.

The event on Tuesday in New York City marked the first sale of the painting since 1986. It sold for 44 times more than the previous price.

An image depicting rural haystacks in the colours of winter daylight, Mules was painted in 1890 and was hugely influential to in the Impressionist art movement.

The oil canvas was first acquired by Bertha Honoré Palmer in 1892, wife of wealthy Chicago businessman Potter Palmer, who remained a great admirer of Monet's work throughout her life.