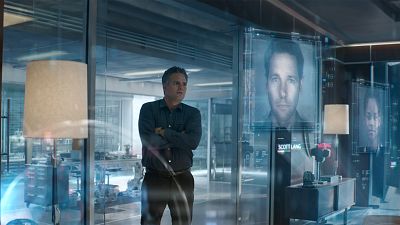 _The superhero saga — with its labyrinthine mythology, sprawling cast of characters and exhaustive Wiki pages — can be a lot to take._ That's why we've put together a quick overview of the new movie for the folks out there who don't know their vibranium from their planet Vormir. (Stay with us, people!)

OK, so what exactly is this movie?

That's a good place to start, especially if you haven't been bombarded with teasers and trailers and billboards and bus ads and action figures and McDonald's tie-ins and Geico insurance spots.

"Avengers: Endgame" is the 22nd entry in the Marvel Cinematic Universe (MCU), a three-phase franchise that began with 2008's "Iron Man" and has since widened its scope to include Captain America, Thor, the Guardians of the Galaxy, Ant-Man, Black Panther and, most recently, Captain Marvel.

"Endgame" is also the fourth and final chapter in a series of movies about the core team of superheroes, such as Robert Downey Jr.'s Iron Man, that began with 2012's "The Avengers" and was followed by 2015's "Age of Ultron" and last year's "Infinity War."

The plot details have been kept under wraps, leaked footageon Twitter and Reddit notwithstanding. We know "Endgame" picks up around where "Infinity War" left off. (Spoilers ahead. You've been warned.)

When we last saw our heroes, the purple-hued intergalactic tyrant Thanos (Josh Brolin, enhanced by computer generated imagery) wiped out half of all life in the universe with the snap of his fingers. "The Snappening," as some die-hards call it.

In the wake of that downer ending, the surviving Avengers and their allies — including Iron Man, Captain America (Chris Evans), the Hulk (Mark Ruffalo), Thor (Chris Hemsworth), Black Widow (Scarlett Johansson), and an acerbic raccoon voiced by Bradley Cooper — are left to pick up the pieces and find a way to resurrect their dead pals.

It's safe to assume that fight scenes will ensue. And for what it's worth, some fans have speculated that time travel might play a key role in "Endgame."

How much money is it expected to earn?

The eternal question! Paul Dergarabedian, a senior media analyst at Comscore and a go-to expert on box-office stats, said he expects "Endgame" to debut in the range of$250 million to $275 million. It could eclipse "Infinity War" ($257 million debut) as title-holder for the biggest opening weekend in North American box-office history.

It's also poised to become one of the highest-grossing movies of all time by the end of its theatrical run, potentially putting it in the same tier as "Black Panther" ($700 million domestic lifetime gross) and "Infinity War" ($678 million).

How much did it cost to make this thing?

It's not entirely clear, and Disney (which owns Marvel Studios and distributes its titles) has been tight-lipped.

But for what it's worth, the similarly-scaled "Infinity War" was reported to have cost somewhere in the ballpark of $300 to $400 million — roughly equivalent to the GDP of the Federated States of Micronesia, or about 17 versions of Jordan Peele's horror smash "Us."

How long is it?

Well, it's pretty darn long — at least by the standards of modern commercial filmmaking.

"Endgame" clocks in at a bladder-testing three hours and two minutes, making it the lengthiest Marvel movie yet. "Infinity War" previously held the record at two hours and 40 minutes. But hey, long runtimes didn't stop "Gone with the Wind" (three hours and 58 minutes) and "Titanic" (three hours and 15 minutes) from becoming certifiable cultural phenomenons.

The mad rush to scoop up advance tickets, after all, suggests that plenty of moviegoers aren't deterred.

Police to investigate lockdown parties at the heart of UK government

In pictures: Snow blankets Greece and Turkey after severe storm