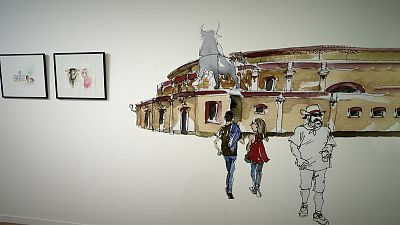 As Portugal’s bullfighting tradition is stirring a tense debate about outlawing it in the country. Cartoon Xira presented an exhibition of the Argentinian cartoonist Marlene Pohle's unpublished drawings.

Created during the 2018 festivities of "Colete Encarnado" ("Red Vest" - the colour of the vest of campinos - the local herdsmen and cowboys) the annual festival of Vila Franca de Xira that honours local herdsmen, lezíria (Tagus prairies) and bulls.

"I interviewed three local bullfighters and they told me their point of view. They are really fascinating stories. So let's say it is not that I agree absolutely, but I do understand this philosophy more. It was very interesting."

‘Ao Correr da Pena’ (Translation: ‘With a Stroke of the Pen’) exhibits 100 cartoons drawn by the Argentine artist who had settled in Germany for 30 years. During the two weeks of her immersion in the life and culture of Vila Franca: bulls and campinos, but also fishermen, fishmongers and regular people.

This year, Cartoon Xira is back to the renovated "Celeiro da Patriarcal" (Granary of the Patriarchal) and honors Augusto Cid, a renowned cartoonist in Portugal who died in March.

The other part of Cartoon Xira will focus on the best cartoons published in Portugal in the previous year. An exhibition model that that curator after 20 years considers balanced.

"I used to joke, saying that Cartoon Xira is from last century. It was born in 1999! The formula has changed over time, we have been fine-tuning it and I think that at the moment Cartoon Xira has a very interesting formula, because it’s a collection of the best Portuguese cartoons of the year and at the same time we have a foreign guest who shows his/her work," said cartoonist and exhibition curator António Antunes.

Throughout a hundred cartoons, the exhibition revisited the main themes that marked the previous year. Brazil and Bolsonaro's election, Brexit, the beginning of the Yellow Vests' crisis in France or the paedophilia in the Church were the themes that most inspired the cartoonists in 2018.

The exhibition runs until July 21st.