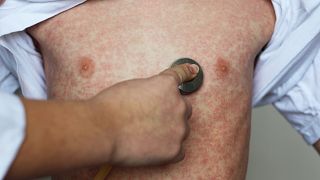 The resurgence of measles may have adults wondering if they're protected against the highly contagious virus. If you were exposed today, would you be immune?

This year is already off to a troubling start, with more than 200 cases of measles confirmed in 11 states, including California, Colorado, Connecticut, Georgia, Illinois, Kentucky, New Jersey, New York, Oregon, Texas and Washington.

With 349 cases confirmed last year, 2018 was the second-worst year for measles since 2000, when the disease was eliminated from the U.S., according to the Centers for Disease Control and Prevention.

Outbreaks have been linked to U.S. communities with pockets of unvaccinated people and travelers who get measles abroad and bring it back home. The disease is surging to "alarmingly high levels" around the world, UNICEF warned last week.

There was another scare last month when an "unvaccinated and infectious" passenger traveled through Chicago Midway International Airport and may have exposed others to the disease.

There's lots of talk about how to protect children, but adults with measles are 10 times more likely to be hospitalized because they're more likely to get pneumonia — one of the complications of measles.

How can you tell whether you've been vaccinated at all or need a booster shot? TODAY asked Dr. Paul Offit, director of the Vaccine Education Center at Children's Hospital of Philadelphia and an attending physician in the hospital's division of infectious diseases.

What is measles and what is the recommended immunization?

Measles — a viral respiratory illness — is more contagious than Ebola, tuberculosis or influenza, according to UNICEF. It spreads through coughing and sneezing and there is no specific treatment for the disease.

To prevent getting measles, the CDC recommends children get two doses of the MMR (measles, mumps and rubella) vaccine, starting with the first shot at 12-15 months of age, and the second dose given at 4-6 years of age.

How would adults know whether they're protected against the measles?

There are only two ways to be protected against measles: One is to have been naturally infected with the disease, which then gives you a specific immune response, and the other is to be vaccinated, Offit said.

If you were born before 1957: You've most likely had the measles, even if it was a very mild "subclinical" infection that produced no symptoms, so you're almost certainly immune.

"If you were born after 1991 and have received both doses, you have about a 97 percent chance of being protected."

That leaves a window of uncertainty for people born in the late 1950s and early 1960s — how do they know if they're protected?

If you know you've had the measles at some point during your life, you're protected. If you don't know and you don't have any records of being vaccinated, you may not be immune.

You could ask your doctor for a blood test to see whether or not you have measles virus specific antibodies. This is called laboratory evidence of immunity.

But Offit doesn't recommend the test because it's about as expensive as the vaccine and it's not "perfect," he said. People who don't have circulating antibodies in their bloodstream can still be protected if they have memory immune cells, which can't be measured commercially, he noted.

Consider getting a first dose of the vaccine or a booster shot, especially if you're traveling.

"I would say probably the thing that makes the most sense is that if you were going to an area where measles is common, like Europe for example, it would probably be reasonable to get a measles-containing vaccine," Offit said.

He recommended getting it 10-14 days before the trip.

What if it's been decades since a person has had the vaccine?

If you've had two doses of the measles vaccine as a child, the CDC considers you protected for life.

If you're uncertain whether you've had two doses of the vaccine, should you ask for a booster?

Yes, there's no harm in getting a booster shot at any time.

Again, people born between 1963 and 1991 likely received only one dose of the vaccine.

"So you could argue, 'Although I have a 90 percent chance of being protected, I can put myself in an even better position by getting a booster dose,'" Offit said.

If a person doesn't have immunity and gets exposed to the measles, would getting a vaccine right away help?

Yes, because the incubation period for measles — the time from when you're first exposed to when you get sick — is fairly long at 10-12 days.

"If you get the measles vaccine within 48 hours of being exposed, you dramatically decrease your chances of being infected. It's actually recommended for up to five days later, but the best data are in the first 48 hours," Offit said.