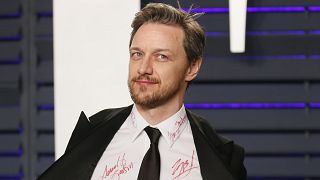 Talk about a showstopping Oscars look!

James McAvoy sported a traditional suit at the Academy Awards red carpet, along with a crisp, white shirt and a dark tie.

But when he arrived at the Vanity Fair after-party, his look had transformed. He opened his jacket to reveal that his shirt was covered in signatures from fellow celebrities.

"Went to the Oscars. Presented. Got mugged by Sharpie-wielding celebrities," he wrote on Instagram, along with a selfie of his autographed shirt. "I'm sure my shirt is going to be defaced by more of these entitled graffiti mentalists as the night goes on."

"When I found (a) Sharpie on the floor, I started to ask all our celebrity friends to start signing my shirt," he said. "I don't know why I had that idea, but I did."

And that impromptu idea will ultimately help raise money for a great cause.

Add McAvoy to the list of celebrities with unforgettableOscars style!