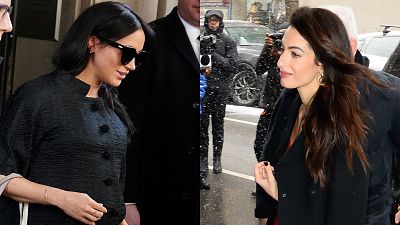 The former Meghan Markle, who made a surprise trip to New York Cityover the weekend, is expecting her first child with hubby Prince Harry this spring — and on Wednesday, her closest celebrity pals got together with her to celebrate the joyous milestone.

Amal Clooney, Gayle King, the duchess' BFF, Jessica Mulroney, and her former "Suits" co-star Abigail Spencer were all spotted entering The Mark Hotel in Manhattan for the baby shower.

Clooney, who looked stunning in a red jumpsuit under a black coat, arrived to the posh hotel along with an associate who carried two bags bursting with gifts.

King, who wore a purple coat with a cheery pink-and-red scarf, carried her own bag full of presents for the royal mom-to-beand her baby.

Since arriving days ago on her secret flight, Meghan, 37, has been catching up with all her Big Apple besties.

She spent Saturday making several stops in the city's SoHo neighborhood. Harper's Bazaar reported that she visited the bakery Ladurée, where she snacked on macaroons and sipped tea with Mulroney, the Canadian stylist whose children were members of Meghan's bridal party at last year's wedding.

The trip is believed to be Meghan's first back to the United States since becoming a member of the British royal family last year after her May 19 wedding.

TODAY royal contributor Camilla Tominey said it makes sense that the duchess wants to make the most of her limited free time before she becomes a royal mom.

"Clearly she wants to see some of her closest friends and celebrate before the (baby's) arrival," said Tominey.

Meghan is expected to fly home this week to London, where she'll reunite with Prince Harry before the pair head off again to Morocco for an official engagement. That trip is expected to be the last flight abroad before the birth of Baby Sussex.