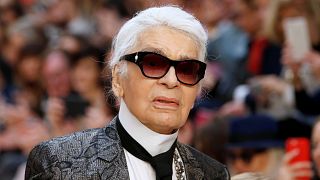 It's a sad day for the fashion world. Karl Lagerfeld, iconic designer and creative director of Chanel, has died at the age of 85.

The House of Karl Lagerfeld broke the news on Instagram, revealing that the German designer passed away today in Paris.

Lagerfeld first joined Chanel in 1983 and left an indelible impact on the brand. Chanel CEO Alain Wertheimer reacted to Lagerfeld's death on the brand's Instagram, writing, "Thanks to his creative genius, generosity and exceptional intuition, Karl Lagerfeld was ahead of his time, which widely contributed to the House of CHANEL's success throughout the world. Today, not only have I lost a friend, but we have all lost an extraordinary creative mind to whom I gave carte blanche in the early 1980s to reinvent the brand."

Although he mostly known for his role at Chanel, Lagerfeld also served as creative director of Fendi and had his own namesake label at the time of his death.

With his signature white ponytail, black sunglasses and high collars. Lagerfeld was distinctly recognizable as a fashion icon in his own right.

After hearing the news, fans worldwide promptly took to social media today to express their sadness. SupermodelIman summed it up quite well when she called Lagerfeld's death "the end of an era."

Naomi Campbell took the opportunity to thank Lagerfeld for taking a chance on her and helping shape her modeling career.

Model Linda Evangelista also shared her appreciation for Lagerfeld, calling him the "great love of my life."

Over the years, Lagerfeld developed countless relationships with fashion-industry insiders, and his fellow designers seemed to truly respect his vision. Donatella Versace took to Instagram to pay tribute to the designing genius, writing, "Karl your genius touched the lives of so many, especially Gianni and I. We will never forget your incredible talent and endless inspiration. We were always learning from you."

Carla Bruni, the model and former French first lady, credited Lagerfeld for bringing "beauty and lightness" into the world and for having "so much wit in our dull days."

Lagerfeld was a man of many passions, including photography, and Kim Kardashian West shared a series of photos with the legendary designer, revealing that he shot her first-ever photo shoot.

British fashionista Alexa Chung thanked Lagerfeld for inviting her to "some of the most glamorous experiences" of her life.

Friends and fans alike paid tribute to the designer, and Jessica Simpson shared her adoration for Lagerfeld.

Like many of his fans and muses, Bella Hadid thanked Lagerfeld for sharing his inspiring vision with the world.

Kaia Gerber shared her gratitude for the designer as an up-and-coming model.

And Kris Jenner shared a series of photos of Lagerfeld with her family.

It's clear that the legendary designer will be very missed.

'I am very much down-to-earth. Just not this earth': Lagerfeld's wit