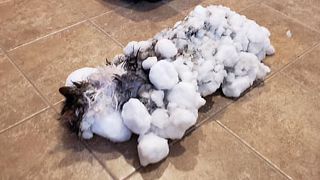 It's any pet parent's worst nightmare.

On Tuesday, the Animal Clinic of Kalispell in Kalispell, Montana, introduced the world to Fluffy, a longhaired domestic cat, and shared her miraculous story on Facebook.

In the Facebook post, a staffer wrote, "Amazing success and survival story from this week. Some clients found their injured cat buried in snow. They brought her to us essentially frozen and unresponsive. Her temperature was very low but after many hours she recovered and is now completely normal. Fluffy is amazing!"

Fluffy's owners, who wish not to be identified, found her outside on their property last Thursday when temperatures had dipped below freezing. She had suffered an injury that prevented her from returning indoors.

Fluffy was immediately rushed to the Animal Clinic of Kalispell, where staff sprung into action.

"It was all hands on deck, with two veterinarians and four technicians that afternoon," Andrea Dutter, executive director of the clinic, told TODAY.

When staff started treatment, Fluffy's body temperature was under 90 degrees. The team, led by clinic owner Dr. Jevon Clark, D.V.M., and Fluffy's vet, Dr. China Corum, D.V.M., used a variety of methods to defrost Fluffy. They utilized warm water fluids, an IV solution and towels to help raise her body temperature back up to a stable 101 degrees.

"It took about an hour for her temperature to return to normal. She started moaning and growling at us and was her normal, lovingly crabby self. That's how we knew she was going to be OK," Dutter told TODAY.

After she was revived, Fluffy stayed overnight in the emergency room and was ready to return home on Saturday. At her follow-up appointment this past Tuesday, Fluffy was rechecked and cleared with a clean bill of health.

Dutter told TODAY, "Dr. Clark has not seen this happen in his 20 years of practicing. The one thing we can keep saying is that Fluffy is amazing!"

Fluffy's experience highlights "the importance for pet owners to keep an eye on their pets, their shelter, and their water, and to have a place for them to be safe," Dutter said.

Although spring may be on its way, it's crucial to pay attention to any pets or animals who may be outdoors in the cold and to take appropriate action when necessary. For Fluffy, her owners made a life-saving decision.

"They didn't think twice and they brought her straight to us to treat her medically," Dutter said.