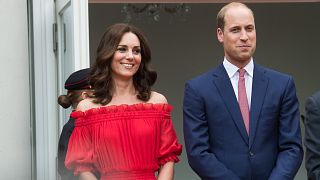 BERLIN, GERMANY - JULY 19: Prince William, Duke of Cambridge and Catherine, Duchess of Cambridge attend The Queen's Birthday Party at the British Ambassadorial Residence on the first day of their visit to Germany on July 19, 2017 in Berlin, Germany. The   -   Copyright  MATTHIAS NAREYEK/AFP/Getty Images
By Ronnie Koenig  with TODAY Lifestyle  •  Updated: 03/02/2019

The former Kate Middleton is the lady in red!

On Thursday, Catherine, Duchess of Cambridge made a bold fashion choice, stepping out in a red-hot number for her mother Carole Middleton's 64th birthday party.

The off-the-shoulder, lipstick red Alexander McQueen dress may have stunned fans of the royals who aren't used to seeing Kate in such a vibrant color, but this was actually not the first time she donned this amazing frock. The 37 year-old, who is known for recycling her favorite wardrobe items, wore the same dress back in 2017 for Queen Elizabeth II's birthday festivities, which she attended with husband Prince William.

At the queen's celebration, Kate paired the maxi dress with a pair of nude sandals but this time around, she opted for pointy-toed red shoes. She was seen wearing a black coat over her ensemble and carrying a shopping bag on her way to her sister Pippa Middleton and brother-in-law James Matthews' home, where the birthday celebration was held. Prince William, who recently teased his wife about her fashion choice, and their children were not in attendance, as the mom of three stepped out on her own.

Alexander McQueen has been one of Kate's go-to designer labels. Her wedding gown was designed by Sarah Burton, creative director of the luxury fashion house.

In October 2018, she wore McQueen to Princess Eugenie's wedding to Jack Brooksbank. Her pleated, berry-colored dress was both gorgeous and eye-catching, paired with a matching fascinator by Philip Treacy. Later that same month, she stepped out in a powder blue mermaid silhouette by McQueen that evoked Disney's Cinderella for a state banquet.

For her mother's party this past week, it was fun to see Kate in a more trendy, boho-inspired look with peasant sleeves and a cinched waist that's a definite departure from the classic, elegant lines that are her trademark look.

Just like the $72 maternity dress she wore for a royal family portrait that sold out within two hours, the red dress triggered the "Kate effect," immediately selling out the first time she was photographed wearing it. It's no wonder that fans of the royals want to emulate her brilliant cherry-red bohemian look. Thankfully, there are many similar styles available (and with a lower price tag than the approximate $3,000 cost of the designer dress).

We'll be watching to see what the Duchess of Cambridge steps out in next so we can marvel at her great sense of style — and steal her look!

'Forgotten' Holocaust heroes help Slovakia come to terms with its past