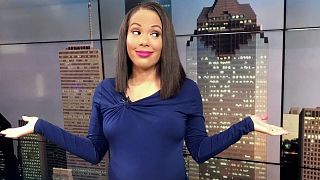 If you ever wonder how to make small talk with a pregnant woman, here's a pro tip: She doesn't want to talk about her weight.

Houston news anchor Erica Simon found out the hard way that while she is growing a human being from scratch, some viewers would want to weigh in on her appearance. She wasn't having it.

"Some of the viewer comments about my pregnancy are starting to get annoying," Simon tweeted on December 26. "Yes, I'm aware I'm petite, so the sudden packing on of pounds is a startling sight."

Simon added what could be the battle cry of many a third-trimester expectant mother: "No, I'm not having twins, and no, I'm not due any day.

Simon, the weekend anchor at ABC13 announced her pregnancy in October when she was 20 weeks pregnant. She and her husband are expecting their first child, a baby girl.

After her tweet, Simon was flooded with support from far and wide, including fellow news anchors. "Come on, Erica. It's not like you're creating a life here... oh wait, THAT IS WHAT YOU'RE DOING!" replied Lina de Florias, an anchor at the Houston Fox affiliate.

"There's something about when you're pregnant that makes people think it's OK to make comments and ask intrusive/inappropriate questions," commented Twitter user @moonbeam 2007. "And physically touch you in places they would never touch a non-pregnant person. #notcool"

"Not cool at all," Simon replied.

Never miss a pregnancy story with the TODAY Parents newsletter! Sign up here.

Simon's tweet garnered a lot of attention, including almost 150 comments and over 700 likes. A few days later, she tweeted again, letting fans know that she was feeling better, thanks to her No. 1 fan.

"Just had a 45-minute convo with my Gram," she tweeted December 30. "She told me to be strong, feed my spirit daily and don't carry around trash (the negativity of others)."

Note to Simon: That's good advice for all moms, expectant and in the trenches!