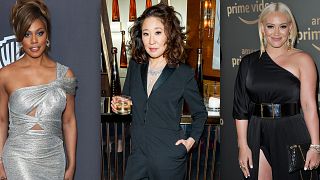 These are some of the best after party Golden Globes styles.   -   Copyright  TODAY, image courtesy of merchant website
By Chrissy Callahan  with TODAY Lifestyle  •  Updated: 08/01/2019

Hollywood's elite arrived at Sunday night's Golden Globes red carpet dressed to impress, but some of them saved their best outfits for last. From dazzling sequins to comfy kicks, these enviable after-party looks gave their red carpet counterparts a run for their money.

After wowing on the red carpet in a skin-tone ballgown, the "Crazy Rich Asians" star stepped out in a slinky spaghetti-strap gown with plenty of dazzling sparkles.

It's been a busy couple of weeks for the "Mary Poppins Returns" star, but she still found time to select this totally dreamy ruffled dress.

The actress was pretty in pink on the red carpet, but broke out a stunning, one-shoulder metallic gown to celebrate her win later in the night.

The nominee looked lovely in yellow on the Globes red carpet and brought out a showstopping, bedazzled suit for the after-party.

After getting all dolled up for her hosting duties, Oh kept things casual with a sleek suit and sneakers after the show ended.

The "Will & Grace" actress didn't take home an award last night, but she certainly won our hearts with both of her sparkly outfits.

After recently revealing she had a second kidney transplant, the actress stepped out looking healthy and happy in a printed wrap dress.

The "Orange is the New Black" star stole the show at the InStyle and Warner Bros. after party in this curve-hugging metallic masterpiece.

Duff made a fashionable return to the red carpet after giving birth to her daughterearlier this fall in a slinky black, asymmetrical dress.