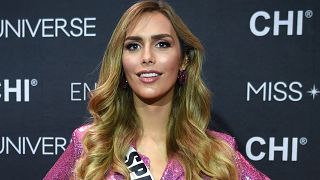 Life is a whirlwind for Angela Ponce these days as she prepares for the 2018 Miss Universe pageant in Bangkok.

The model and beauty queen will represent Spain in this year's competition, and she has been busy doing fittings, visiting local attractions in Thailand and getting to know her fellow Miss Universe contestants.

Growing up, Ponce dreamed of competing in pageants — in fact, she dreamed of being a Barbie — but she never imagined she would actually make it this far.

"I never imagined (I would make it to Miss Universe) because I lived in a society where everyone said I couldn't do that," Ponce told TODAY Style through a translator. "And I didn't have the information to realize that my dream to be a woman could ever actually be realized."

People did not always accept or understand her, and Ponce admits there have been "many times" in the past when she wanted to give up. However, in those moments of doubt, she tapped into a deep, inner strength.

"I wanted to live, and I wanted to be happy and free," she said. "I believe that that strength is within all of us. I looked in the mirror and I said to myself, 'You can do this.'"

Luckily, Ponce's family embraced her identity, and they supported her decision to live openly as a woman.

"I always had the support of my family and they're my foundation so that my life could unfold," Ponce said. "They saw to it that I did not have a traumatic childhood. They are my strength."

Now, Ponce has people rooting for her all over the world. Many of her more than 400,000 Instagram followers post supportive messages on her photos, calling her beautiful and inspiring.

There are some negative, hateful comments as well, but Ponce focuses on the positive side of social media, and on her ability to give hope to others.

"I feel like it's an incredible thing because I'm able to give voice to so many people and reach so many people in the world," she said. "This is something that was never before spoken about, or we were really able to speak about."

And her social media presence is more than generally inspiring — it can be a lifeline for transgender youth who are struggling with their identity.

"One time I saw a case on Facebook of a girl and she was considering suicide and needed to speak to somebody," Ponce recalled. "Although I didn't know her, I tried to calm her down by speaking with her, and today she is a happy woman."

Ponce is on a mission to change this. She wants to be a role model for young people and show them that it's possible to live an incredible life as an openly transgender person. As part of her mission, she is working with the Daniela Foundation, a nonprofit organization that helps children and parents who are struggling with transgender issues.

"I believe that my part in Miss Universe is to save lives," she said.

Her mission may be serious, but life as a beauty queen is full of fun moments, too. Ponce's Instagram feed is a stream of photo shoots, selfies from the makeup chair and endorsements of her go-to beauty products, from curling irons to lash extensions to Dior face palettes.

Beauty pageants sometimes face criticism for objectifying women, or for presenting a certain feminine ideal that doesn't represent all women. But Ponce doesn't see it that way. For her, competing in Miss Universe is an empowering, feminist choice.

"None of us are obligated to be here. And for me, it's a platform to share my voice," she said. "To me, feminism is freedom to do what you want, when you want to. We cannot put brakes on the freedom of women, on one platform or another."

Miss Universe is giving Ponce an incredible platform for sharing her voice, but at the same time, she hopes that one day, the presence of a transgender person in the competition will not be novel or newsworthy. As future generations become more accepting, she thinks this is possible.

"I think the important thing is to develop education at the grade-school level and give the opportunity to these people like me to be visible," she said. "That way, youth and the society (will be) informed of diversity, and the new generations will look at it as normal."