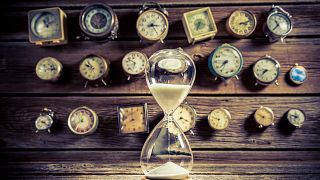 Go new places. Meet new people. Be spontaneous when you can be. These are all exercises for enhancing your sensitivity to the passage of time.   -   Copyright  Shaiith iStockphoto/Getty Images
By Nicole Spector  with NBC News Better  •  Updated: 27/11/2018

The expression "time flies", originating from the Latin tempus fugit, is one we all find ourselves saying or thinking, even when we aren't having fun (as the extended expression goes).

The flight of time can be so fast it can feel, upon reflection, like our life is passing us by. Whether we're scrolling through Facebook looking at the photos of old friends, dropping our children off at school and feeling moved by how big they're getting or celebrating our own birthday, we may stop and say, "where'd the time go?"

It's a powerful, sobering revelation.

But it wasn't like this when we were children, was it? I remember how each year, broken into school semesters, holidays and summer vacations, seemed to pass slowly, at a kind of diligent down tempo pace so that every experience, no matter how mundane, could be fully processed.

This perception of time moving at a leisurely pace in childhood, and then quickening as we become adults, is a common experience, neuroscientists note.

The perception of time is relative, but age and memory play major roles

"Most [adults] feel that time elapsed slowly in their earlier days, but then speeds up later in life," says Santosh Kesari, MD, PhD, neurologist, neuro-oncologist, neuroscientist and chair of the Department of Translational Neurosciences and Neurotherapeutics at the John Wayne Cancer Institute at Providence Saint John's Health Center.

This perception may be due to a few factors, Kesari points out, firstly that when we're children, a year of life amounts to much more time of existence, percentage-wise.

Additionally, when we are children, we are constantly being introduced to new things and ideas that leave lasting impressions on our memories.

"We gauge time by memorable events and fewer new things occur as we age to remember, making it seem like childhood lasted longer," Kesari says.

It's important to note that the type of time-perception we've been discussing thus far is retrospective perception. In other words, we're talking about remembered time, rather than time as we are experiencing it in, well, real time.

But there is evidence that our perception of time as we are experiencing it is also slower when we are very young children.

"Children's working memory, attention and executive function are all undergoing development at the neural circuit level," says Patricia Costello, PhD, a neuroscientist and program director at Walden University. "Their neural transmission is in effect physically slower compared to adults. This in turn affects how they perceive the passage of time. By the time we are adults, our time circuits are done wiring and we have learned from experience how to correctly encode the passage of time."

One method of testing that researchers have used to determine this discrepancy in time perception between children and adults is temporal bisection tasking. In this method, researchers may have participants listen to a series of tones and compare them in terms of duration.

"I've done these lab studies [with bisection tasking]," says Costello. "You first hear a short tone that's about a fraction of a second. Then you hear comparison tones. You're supposed to respond after the short and long tone and say is if the next tone is more like the short or more like the long one and then [the researchers] measure how accurate you were in your perception."

It has been found that the youngest participants (typically five years of age, when they are old enough to understand the task) have the least accuracy in time perception in these tasks, and tend to hear those short tones as longer than they actually are.

"The theory is that we get better over time," says Costello. "Children who are eight to 10 years old get fairly accurate at it. It has to do with processing speed and how well they pay attention, but also that when a child, the brain is still developing. Their neurons don't have all their myelin — the insulator on the neuron."

This lag in real-time time perception doesn't span beyond early childhood, nor does it play a role in retrospective time-perception, and ultimately, doesn't explain that subjective experience we have in adulthood where we feel like time passed more slowly when we were young. That specific sensation is more likely attributed to the fact that children have had less time on the planet, such that a year feels weightier, as well as the fact that we aren't forming as many new memories once we reach adulthood.

Life passing you by? Consider the 'Holiday Paradox'

But there's a way to change this — to an extent. Surely, we can't slow time itself down (that would require defying the laws of physics), but we can do things to pace ourselves and create more lasting impressions of times past.

Costello draws attention to the Holiday Paradox, also called the Vacation Paradox, a theory of time-perception coined by psychology writer Claudia Hammond in her book "Time Warped: Unlocking the Mysteries of Time Perception".

This theory unpacks the subjective experience of how time flies when you're having an enjoyable, new experience like a vacation, but then later, in retrospection, it feels like it lasted longer than it really did.

We could spend a great deal of time (however you perceive it) discussing this theory, but here's a helpful key takeaway: a novel experience may feel like it's flying by, but you'll have a deeper impression of that time, and likely have a bundle of unique memories tied to it that will also give stretch and substance to that time gone by.

It doesn't have to be a vacation or a visit to a foreign country to elongate your sense of the past. It can be as simple as consistently trying something new, and/or of continuously learning.

"How can we stop that feeling of things going too fast, of missing out on our own lives? It comes back to learning new things," says Costello. "Are you learning a new skill? Are you cooking something different? Introducing novelty into your life when you can will make the memories stand out and stretch time in a way."

Introducing novelty into your life when you can will make the memories stand out and stretch time in a way.

Go new places. Meet new people. Be spontaneous when you can be. These are all exercises that Costello champions for enhancing your sensitivity to the passage of time. It's also a system that mirrors childhood to an extent.

"Children have routine and mundane moments, too, but they're always learning something new," she says.

At the end of each day, recall your time as vividly as possible

Kesari suggests another potential retrospective-time enhancing hack: Remember your day as vividly as possible at the end of it.

"I suspect that if you spend half an hour every night really reflecting on what has happened that day, it may ingrain them to make them more unique," says Kesari. "Memory is short-lived and many of us just aren't that engaged in the everyday things we're doing, so if you slow down and engage more in the moment, and look back on everything deeply later, you may find time lasting longer."

MORE IN THE 'YOUR BRAIN ON' SERIES