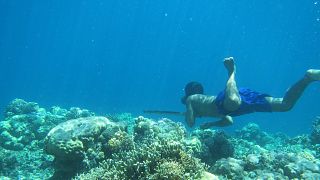 The Bajau, who live in wooden houseboats off the coasts of Indonesia, Malaysia and the Philippines, spend 60 percent of their time, about eight hours a day, underwater.   -   Copyright  Courtesy Melissa Ann Ilardo
By Lauren Dunn and Avichai Scher  with TODAY Health and Wellness  •  Updated: 26/11/2018

Researcher Melissa Ann Ilardo was in Thailand studying coral genomics when she heard about a nomadic sea people living in Southeast Asia, the Bajau.

The Bajau, who live in wooden houseboats off the coasts of Indonesia, Malaysia and the Philippines, spend 60 percent of their time, about eight hours a day, underwater. They catch fish and octopus with their bare hands while walking on the ocean floor, 200 feet below the surface. And they do it all with practically no diving equipment. They're almost sea creatures.

That piqued Ilardo's interest. "I heard that they had extraordinary diving abilities," said Ilardo, an evolutionary geneticist at the University of Utah. "I thought it seemed like a really interesting opportunity to study natural selection."

"When you see how they move underwater and how comfortable they are, it really seems like there must be something special going on," Ilardo told NBC News.

What enables them to be so comfortable in the water is their ability to hold their breath for unusually long amounts of time — sometimes up to 13 minutes.

Ilardo was eager to find out how this was possible, but took the time to get to know the Bajau before studying them. On her first trip, she spent time talking and diving with them. She returned a second time armed with a hypothesis — and an ultrasound machine.

"You could think of it as getting an extra breath of air while you're underwater," she said.

She went from home to home with a portable ultrasound machine and asked to measure people's spleens. Not exactly a typical home visit for the Bajau, but they were open to it.

"They were a little puzzled by the ultrasound machine and by this weird question of they might have bigger spleens," Ilardo said. "But they were curious themselves to find out if that was true."

Ilardo's hunch was right. She found that their spleens were 50 percent larger than most people's.

"It was a striking difference," she said.

For comparison, she looked at the Saluan people, who live nearby, but don't dive as the Bajau do. The Bajau had spleens 50 percent larger than theirs, too. The difference applied to all the Bajau people, even those who don't dive.

For Ilardo, this was further evidence of another hypothesis — that over the thousands of years the Bajau have been diving, their spleens have adapted, just as researchers believe Tibetans have adapted to live at high altitudes.

Ilardo collected DNA samples when she measured the spleens and later conducted genome sequencing in her lab. The gene PDE10A stood out to her. It's a gene active in the thyroid gland that regulates the release of hormones. The version of the PDE10A gene found in the Bajau was studied in rodents and found to be associated with higher levels of hormones, which can cause the spleen to grow larger.

It was a remarkable finding because it went beyond adaptation for survival.

"In the example of the Tibetans, you have humans moving into this very extreme environment and adapting to these conditions," Ilardo said. "But what we see in the Bajau, they're imposing these conditions on themselves, they're creating an environment that is causing them to evolve."

The findings, published in the journal Cell in April, garnered a lot of media attention, and Ilardo has continued to research data gleaned from the genes of this unique community. But she took a risk by taking the research on

"I bet my Ph.D. on it. I was warned against it by both of the supervisors on the project," she said. "We just haven't seen that many examples of adaptation in modern humans."

As much as her findings and her success, the experience of seeing the Bajau in person continues to amaze her.

"After I heard about them, I looked into some videos online and you can just see them walking around on the sea floor," she said. "They're really unbelievable to see on land."