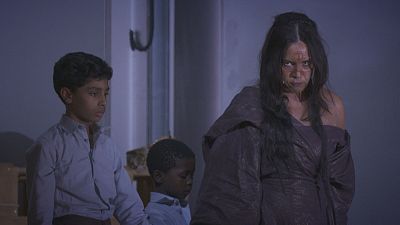 The tragedy of disappointed love and violent revenge takes centre stage in this edition of Musica.

"I want people to understand the story of Medea," says Yoncheva. The Bulgarian star soprano makes the role of tragic heroine Medea her own in this mesmerising debut.

"She's a human being who suffers in a very explosive way and at the same time I find her incredibly intelligent and she is completely irresistible," she says.

The Berlin State Opera's production of Medea is all-new, revitalising the mythical story of disappointed love and violent revenge written by Luigi Cherubini in 1797, a highly-esteemed composer of Beethoven’s era.

"It's a revolutionary score and at some moments you are convinced that without this piece Beethoven would have never been able to compose Fidelio, to such an extent it is pointing towards the future. There are also moments, where it sounds almost like Berlioz, absolutely like the 19th century," he says.

Written just after the French revolution, it is based on Euripides’ tragedy of Medea, who murders her children to take revenge on her husband who leaves her for Dircé, a role that is passionately interpreted by French-Danish soprano Elsa Dreisig.

"Dircé is torn apart between two poles. On the one hand she is full of hatred for this woman because she represents her disaster," says Dreisig. "She is cursed but Médée also represents a free woman."

"All the third act is a moment of absolute power because basically it's not only the destruction she provokes but also the feeling of totally losing control but still showing the power of this woman," says Yoncheva. "I think she's in a sort of trance but at the same time a very conscious trance. This is what I connect to: to the enigmatic way of writing music."

It is still a piece of music well over 200 years old, so isn't its every twist and turn already well-known?

"It's never, ever, predictable. And this I really love. It took me time to really absorb it because it's absolutely music that you cannot predict. It never goes in the direction you really think it should go," insistes Yoncheva. "I like this kind of enigma. I'm always fascinated by impossible things, by mysterious music.”