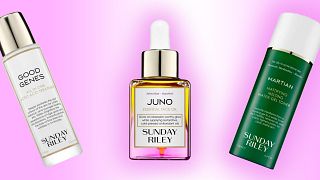 When it comes to purchasing a new skin care product, online reviews make a big difference. There's an inherent level of trust involved, and it's nice to know that other customers are offering up their genuine opinions.

At least, we hope it's fellow customers offering their honest opinions.

"I'm sharing this because I'm no longer an employee there and they are one of the most awful places to work, but especially for the people who shop us at Sephora, because a lot of the really great reviews you read are fake. We were forced to write fake reviews for our products on an ongoing basis, which came direct from Sunday Riley herself and her Head of Sales. I saved one of those emails to share here," the employee wrote. (Sunday Riley is both the founder's name and the company's namesake.)

News went viral after beauty industry Instagram page @esteelaundry posted a copy of the email on their page.

In the same email, a Sunday Riley official also gives employees clear directions on how to write the planted product reviews, offering up key highlights to feature.

"When reviewing Saturn please address things like how cooling it felt, the green color, the non-drying mask effect, radiance boosting, got rid of your acne after a couple uses," the email reads. "It helps to make yourself seem relatable - like you know how hard acne is and you've tried everything, and this one actually works or mention things like yes, it's a little more expensive, but works incredible well compared to the cheaper masks out there."

Employees were also encouraged to refute negative reviews: "As reviews come in, read them too. If you notice someone saying things like I didn't like 'x' about it, write a review that says the opposite. The power of reviews is mighty, people look to what others are saying to persuade them and answer potential questions they have."

Sunday Riley soon addressed the controversy in a comment on Instagram, and admitted that the claims were true.

"As many of you know, we are making an effort to bring more transparency to our clients. The simple and official answer to this Reddit post is that yes, this email was sent by a former employee to several members of our company. At one point, we did encourage people to post positive reviews at the launch of this product, consistent with their experiences," the brand wrote.

It goes on to cite other genuine reviews as proof that Sunday Riley products truly work.

"There are a lot of reasons for doing that, including the fact that competitors will often post negative reviews of products to swing opinion. It doesn't really matter what the reasoning was. We have hundreds of thousands of reviews across platforms around the globe and it would be physically impossible for us to have posted even a fraction of these reviews," the caption said.

Many Instagram users spoke out against Sunday Riley's actions on social media, with some even saying they won't buy from the brand anymore.

"There is no apology. The bottom line is they don't care because they are selling products. When the Sunday Riley products I have are gone I will not be buying more. To them the end(sale) justifies the means," wrote @cinloveskitties in the comments.

A few Instagram users were actually ok with the news, though.

"I support @sundayriley 110%. In the climate they're competing in its cutthroat. While not the most ethical or transparent way to deliver actual reviews, I understand why. Their products kick ass, hands down. I think the @Sephora site should screen them for whether or not the beauty insider account bought a product before allowing a review. Problem solved. Next. A ," wrote @kenotic.meI.

The question is, are other brands doing the same?

TODAY Style has reached out to Sunday Riley for comment.