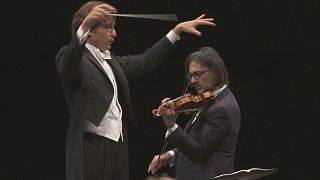 Leonidas Kavakos has a unique timbre and a flawless techinque. In Luxemburg the Greek violin virtuso recently interpreted Stravinsky's extraordinary Violin Concerto in D major, and "Musica" was there to talk to him. He began by speaking about the extraordinary sound Stravinsky created to open each movement.

"The sound of this chord it goes perfectly with Stravinsky's sense of humor, sarcasm, irony and, you know, being so playful about it.”

Stravinsky called the challenging chord that opens each movement and spans over two and a half octaves the "passport to his concerto".

His witty masterpiece from 1931, which has influences from the Baroque era, is inspirational for Kavakos, who performed it with the Luxembourg Philharmonic Orchestra.

"What I love is that we see the Stravinsky who is looking ahead of his time but he's distilling all the energy and the power from the past."

The orchestra's musical director Gustavo Gimeno agrees that Stravinsky's character infuses everything that he wrote.

"It is obvious that it is in the personality of Stravinsky: These colours, these harmonies, this tension, this exploring how far you can go," he says.

"The more one plays it the more one has the chance to approach more of the essence but I should not say that, because I'm sure that if I play this again in five years, I will think of now, and that 'my God I was so far away', and I will still think I'm getting closer. But this is always like this. And also it teaches how much wisdom and genius is in these scores."

A precious Stradivarius that he encountered over two decades ago but was only reunited with last year, opened up a whole new world of sound colours.

"When you find something that fits you, that has the colours that one is looking for, then that is not only a source of knowledge but it's very much a source of influence and inspiration. Because the instrument has such personality and such richness it is something that generates immediately ideas because you hear things that you've never heard before."

Leonidas Kavakos' Greek origins and his interest in philosophy runs through his veins.

"For example when I read Plato's first dialogue, he says that we should interpret the spirit of the poet rather than his words which is exactly what we are looking for when we are playing a piece or we are studying a piece of music. We're not trying to just play the notes but we need to find what is behind the notes."