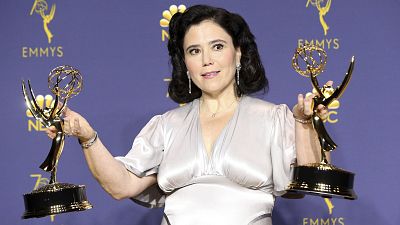 Alex Borstein poses in the press room with the awards for outstanding supporting actress in a comedy series for "The Marvelous Mrs. Maisel" and outstanding character voice-over performance for "Family Guy" at the 70th Primetime Emmy Awards on Monday, Sept   -   Copyright  Willy Sanjuan AP
By Gina Vivinetto  with TODAY Lifestyle  •  Updated: 18/09/2018

Alex Borstein isn't about to let a good dress go to waste!

The 47-year-old actress accepted her Emmy award Monday night wearing the very same silver gown she wore when she tied the knot with her ex-husband.

Borstein, who won the best supporting actress in a comedy award for her role as a tough-talking nightclub booker Susie Myerson on Amazon's "The Marvelous Mrs. Maisel," revealed the news to Glamour magazine on the Emmys red carpet.

"This is actually my wedding dress," said the star. "This was from 20 years ago."

"The marriage didn't last but the dress did and I wanted to give it new life so now it's my Emmys dress. That's the truth."

The actress proved just how funny she was when her name was called as the winner in her category. She handed her purse to her date, dramatically whipped off the jacket portion of her gown and then shimmied hilariously to the stage.

"I went without the bra," she quipped once she was at the microphone.

She also won a second Emmy this year for her voice work as Lois Griffin on "Family Guy."