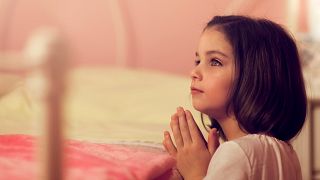 Teens raised in a religious or spiritual environment may be less likely to develop substance abuse, depression and risky sexual behaviors, a new study suggests.

Researchers who followed young people for more than a decade found that participation in weekly religious services or daily prayer or meditation was associated with a wide range of positive outcomes, according to the studypublished in the American Journal of Epidemiology.

"The effects of religious upbringing, including both service attendance or prayer or meditation, has profoundly positive effects in protecting against substance abuse and depression as well as contributing to higher levels of happiness and volunteering," said study coauthor Tyler VanderWeele, the John L. Loeb and Frances Lehman Loeb Professor of Epidemiology at the T.H. Chan School of Public Health at Harvard University.

The results are in line with the findings of astudy published last month, which found that kids had a lower risk of suicide if religion or spirituality was important to their parents.

VanderWeele and his coauthor analyzed data form more than 5,000 children who were taking part in the Growing up Today Study (GUTS). Along with a host of lifestyle, health and environmental factors, GUTS asks two questions relating to religion and spirituality. The study also collects information on health-related quality of life, psychological well-being, mental health and health behaviors.

The kids who signed on for the study are the children of men and women who took part in the Nurse's Health Study.

The researchers found that compared to others, teens who attended religious services regularly were:

Teens who prayed or meditated frequently were:

What about families who aren't religious?

"That's a very good question," VanderWeele said. "Especially considering that in the last couple of decades non-religious forms of spirituality have been on the increase. Certainly mindfulness practices have become quite popular and there is evidence that suggests it has beneficial effects as well."

Engaging in spiritual practice and community participation of all sorts also have beneficial effects on health and wellbeing, he said.

Part of the explanation for the study's findings may be that religion could be filling a void that other teens seek to satisfy through drugs or sex, VanderWeele said.

The new findings were not surprising to Dr. Gail Saltz, a clinical associate professor of psychiatry at the New York Presbyterian Hospital. "Multiple studies have shown that people who are involved with their faith find it comforting, which therefore helps with their mental health and wellbeing," Saltz said.

Saltz suspects that part of protective effect for children may be due to each religion's having a set of rules. "Children and adolescents benefit from a certain amount of structure," she said. "Rules provide comfort particularly for children, even the older ones."

Moreover, "religion provides a community of like-minded people," Saltz said. "That's valuable for both the parents and the children."

That doesn't mean parents should suddenly start pushing their kids to attend religious services if they haven't been doing so all along, Saltz said. That strategy can result in the child revolting, "like, you can have my body, but not my soul," Saltz said.

Saltz also cautions parents against sending teens to services that the parents themselves eschew. "If you're not walking the walk, then your kids are most likely going to follow suit," she said.