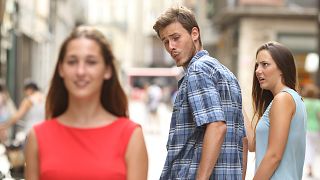 We have such good intentions when it comes to monogamy. Vows, promises, commitment pledges and devotion.

Yet, affairs happen all the time.

In surveys, more than 90 percent of people report having had an opportunity to cheat on their partner, and one in two admit to engaging in infidelity at some point, studies have found. It's still an unforgivable transgression in much of the world: Being unfaithful is the most common predictor of a relationship ending across 160 societies, researchers have reported.

"People care deeply about maintaining monogamy, even when they are often surprised by the attraction they may experience and find their efforts unsuccessful," Brenda Lee, a psychology researcher at the University of New Brunswick, told TODAY.

"Obviously, many of us are successful in maintaining monogamy to our partners. However, with our best intentions, most of us underestimate the strength of attraction as compared to the strength of our self-control."

Can infidelity be predicted?

Two recent studies are shedding light on heterosexual people's behavior when they see an "attractive alternative" enter their lives. How they react automatically in response to this relationship threat may prevent an extramarital affair from developing, though many strategies people employ deliberately don't actually work.

First, married people who were able to turn their attention away faster from good-looking faces and considered them less appealing than single people did had lower odds of infidelity, a paper published by Florida State University researchers in the Journal of Personality and Social Psychology found.

The study involved 233 newlywed couples who were regularly asked about any infidelity in their relationship as they were followed over three years.

In one experiment, they were shown photos of both highly attractive and average looking members of the opposite sex as a machine measured how long it took for them to look away when prompted. They were also asked to rate the attractiveness of those faces, and the results were compared to the ratings of those same photos by single people.

It turned out that the married people who didn't linger on the attractive faces and who "devalued" their attractiveness — or found them less good-looking than the singletons did — minimized the probability of infidelity, the authors wrote. These individuals seemed to be wired to behave this way, acting automatically and needing "little effort or conscious awareness" to do so, the study noted.

At the other end of the spectrum, unfaithful people took longer to turn their attention away from beautiful faces and rated them just as attractive as the singletons did. Having a history of more short-term sexual partners was linked to both behaviors.

Good intentions can still be futile

The vast majority of people — 90 percent — deliberately try to use some way to avoid cheating on their partner, but the most common "monogamy maintenance strategies" don't prevent infidelity, a study published in the journal Personal Relationships concluded.

Lee, the psychology researcher at the University of New Brunswick, and her co-author surveyed hundreds of heterosexual people about how they tried to resist outside temptation while in a relationship and whether they went on to have an affair.

About three-quarters used "relationship enhancement" — trying to boost the bond with their partner by looking extra nice, being intimate, going out on dates or buying presents — and "proactive avoidance" — distancing themselves from the attractive threat by avoiding being alone with them or getting to know them.

Slightly fewer used "low self-monitoring and derogation," or feeling guilty for flirting too much and reminding themselves of the importance of being faithful.

None of these seemed to have much impact on whether the person went on to cheat, suggesting they're not effective strategies for staying faithful, the authors concluded.

Having a conversation about your monogamy expectations and being open about how you'll deal with being attracted to others can save misunderstanding and frustration, Lee said.

"Many of us assume monogamy when we enter into a committed relationship without actually talking about it with our partners, and what monogamy consists of for partners often differs," she noted.

Remember: You could be doing everything right and your partner could still be tempted to cheat for reasons that have nothing to do with you or the quality of feelings you share, said Dylan Selterman, a social psychologist at the University of Maryland.

Humans are promiscuous, and even if things are going well, that doesn't necessarily mean that there's not a desire for more, he noted.