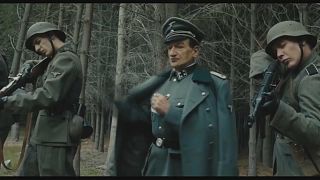 Eichmann was one of Hitler's most willing executioners in his final solution for European jewry.

"The possibility of this kind of global tragedy, national tragedy exists everywhere. When the Mossad went in and captured Eichmann, it was in Argentina in 1960 and 15 years later. Argentina would have its own military dictatorship, concentration camps, mass killings. So, we'd like to think of Germany in the 1930s and 1940s as something that's there and nothing to do with us. But unfortunately, it is an ever present possibility," says Weitz.

Isaac plays Nazi-hunting Mossad agent Peter Malkin in this film, a role he was proud to take on.

"The unsung heroes of this operation. There's a scene at the end at the courthouse when Peter Malkin walks up to the security guard to get in, and he shows him his ID and he says get to the back of the line. Not knowing that this is the guy that actually grabbed him. So, there is something that's just so beautiful and humble and heroic about these guys that just never could talk about what they did," Isaac said.

The story takes place 15 years after the end of World War II, when a team of Israeli agents travel to Argentina to execute an extremely dangerous abduction bringing Adolf Eichmann to justice.

But it wasn't the role that was outside of Isaac's comfort zone; it was more about taking on the responsibility of executive producer.

"Once I got the script and started having conversations with Chris (Weitz) and I read Peter Malkin's autobiography, 'Eichmann in My Hands,' where he details the operation and also his life. It just - it really came to life for me and I had so many thoughts and ideas of how I would love to tell the story, help tell the story, and so it seemed like a perfect time to put that hat on, and to really have a have a hand in shaping the final product," Isaac said.

Nick Kroll, known mostly for his comedic roles, takes a dramatic turn in the film. He spoke of what surprised him most.

Kroll stars as Rafi, the Mossad administrator tasked with the mission. He says the story enticed him to step out of his comfort zone.

"I have done more comedy than dramatic work, but it's always been something that I've been interested in and it really comes down to doing films and stories that seem important and relevant and just like an interesting experience," Kroll said.

In addition, he got to work with Isaac and Sir Ben Kingsley.

Then there was the family connection.

"The personal connection in the story is that my father knew a couple of the guys involved in the extraction of Eichmann, and so all of those things combined to make it a kind of a no-brainer for the kind of project I would want to be involved in," Kroll said.

After an 8 month trial, Adolf Eichmann was found guilty of war crimes, and was hanged in 1962.