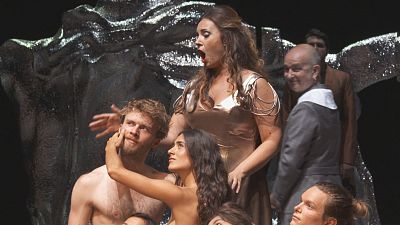 A new production with an unconventional and highly-visual staging is now playing at the Salzburg Festival.

At the heart of the opera is the passionate, obsessive affair between Nero and Poppea, and her bloodthirsty climb to top of Roman society.

A love story, but in a very perverted way

The Bulgarian soprano says Poppea is torn over how feels about Nero: "She loves him, she hates him and she wants to punish him but she wants to have him. She admires him, because for her he's a god but she sees also his defects so... it's a love story but in a very perverted way."

Belgian artist Jan Lauwers directed, choreographed and designed the stage sets. This is the first opera he has directed, and he said it was the only one he'd ever wanted to helm.

"With this incredibly amoral story, it's very dark, maybe the most dark opera ever written - Poppea, ready to kill everyone to gain power and this is all because of passion."

It's a stellar line up, with Baroque master William Christie conducting from the harpiscord and his orchestra Les Arts Florissants. Christie and Yoncheva met over a decade ago, at a masterclass in Geneva.

A return to Yoncheva's Baroque roots

For Yoncheva, playing Poppea was a chance to return to her Baroque roots and an opportunity to work with her mentor Christie again: "When I met William it was love from first sight, it was an incredible combination of musical and artistic freedom. I completely discovered the Baroque period with him, all of the ornamentations, how to trill, how to pronounce, why this colour, why this silence here."

Lauwers' Needcompany dancers play a large part in this highly-visual staging. A production, Lauwers explains, that broke the rules: "You have William Christie who says I will not conduct and I said I will not direct and then we said to the singers - and you, don't behave like opera singers and we'll see what happens then."

The idea was to create a performance that was never exactly the same.

The floor of the stage is covered with paintings of dead bodies from the Renaissance and Baroque eras. Yoncheva describes it: "If you see the stage it is full of bodies and the empire of Nerone and Poppea was built on blood, and death, on dead bodies and it was built on the physical pleasure of possessing bodies."

'The best pop love song ever, for the most idiotic people'

The final duet between Nero and Poppea is probably the most famous of the opera; Pur ti miro.

Lauwers says: "The kinky thing is the end of the opera is a love song, he (Monteverdi) wrote the best pop love song ever - written to the most idiotic people."