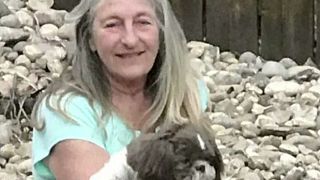 Two recent cases of a rare infection are raising awareness — and anxiety — about the risks of interacting with dogs and cats.

Sharon Larson of South Milwaukee died on June 23 at age 58, after her dog nipped her hand. Starting that same month, Greg Manteufel, 48, of nearby West Bend, Wisconsin, lost both hands and both lower legs to amputation to save his life. Though he came into contact with a few dogs, he said, he was not bitten by any of them.

In both patients' blood, doctors found the bacteria Capnocytophaga canimorsus.

Capnocytophaga is a relatively common bacteria in dogs and cats. It's harmless to them, but it can sicken humans. People with low immune systems are most at risk, according to the Centers for Disease Control and Prevention, but even then, infection is unlikely.

But the two cases, which occurred just miles apart, suggest that healthy people are at risk too.

Neither patient reported a compromised immune system or other risk factors identified by the CDC, such as substance abuse or the absence of a spleen.

"It's extremely rare," Dr. William Schaffner, a professor of infectious disease at Vanderbilt University Medical Center in Nashville, Tennessee, told NBC News on Friday. "We don't know why some people get very ill from it and some don't. This can affect a perfectly normal person."

Schaffner explained that the bacteria enters the skin generally through a bite or when the saliva of the animal comes into contact with an open wound.

Manteufel's case shows that it's hard to know which conditions allow the bacteria to enter the bloodstream. He recalls contact with a few dogs that was limited only to petting. A spokesman for the family told NBC News in an email that Manteufel may have touched his eyes or mouth after petting the dogs.

"It's just a matter of chance if the dog or cat has sufficient amount of bacteria in the saliva, and if it was inoculated deeply enough to cause a problem," Schaffner said. "It's a little bit like being struck by lightning."

A spokesman for the CDC, Benjamin Haynes, said in e-mail that cases of Capnocytophaga infection do not have to be reported to the CDC. Still, the agency received reports of 12 cases last year. "These are likely only the most severe cases or those in which diagnosis was complicated for some reason," he said.

The rarity and mystery of Capnocytophaga infection have left Larson's adult children, Steven Larson and Stacy Larson-Hruzek, struggling to make sense of what happened.

In an interview with NBC News, they said their mother brought Bo, a Shih Tzu, home in February. On June 19, Bo nipped her finger, which they described as just a "pin prick."

The next evening, she said she was feeling a little under the weather.

By the following afternoon, she was feeling too weak to eat or hold a glass of water. Her husband took her to an urgent care center, which sent her straight to the emergency room.

Her kidneys were failing, and she was complaining of stomach and leg pain. The doctors ran multiple tests.

"We told them about the dog bite, but they didn't think it could be anything related to that," said Larson-Hruzek, who flew in from her home in Colorado when she heard of her mother's illness. "I looked at her hand right away. It looked just like a little kitchen cut."

On the morning of June 22, a Friday, doctors identified the Capnocytophaga bacteria in Larson's blood, according to her children.

"It happened so fast, her body started shutting down," Steven Larson said. "Her whole body became purple. They were trying to keep her organs functioning so the antibiotics could fight the bacteria."

By Saturday afternoon, Larson was dead.

"My mother was amazingly kind, she would do anything for others," Larson-Hruzek said. "Her smile will live on through her five grandkids, and a sixth on the way."

As scary as these cases are, Schaffner cautioned against overreacting. "We don't want to strike fear in the hearts of all dog and cat owners. This is a very rare event," he said. "If you do get an injury and it looks like it's getting worse, or you're not feeling well, seek medical attention quickly."

The Larson family is taking this advice — Bo the dog is still living with Sharon's husband, but not without some anxiety for the family.

"Bo nibbled my hand and it made me worry," Steven Larson said. "I watch and see how I'm feeling. But there's no change in how much we love Bo."