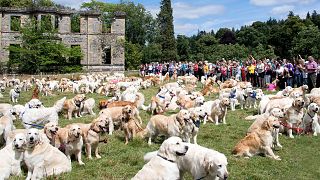 Commemorating the 150th Anniversary of the breed, 361 Golden Retrievers gather back at their ancestral home of Guisachan House and Estate in the Highlands of Scotland, setting a new World Record. The Estate belonged to Lord Tweedmouth who started the bree   -   Copyright  Sandra Mailer REX/Shutterstock
By Molly Thomson  with TODAY Lifestyle  •  Updated: 22/07/2018

While a field brimming with hundreds of golden retrievers sounds more fantasy than reality, that's exactly what came to pass last week at Guisachan Estate in Tomich, Scotland.

The Golden Retriever Club of Scotland organized the gathering to celebrate the 150th anniversary of the breed. It was held at Lord Tweedmouth's former estate, where the golden retriever was first bred in 1868, and well over 300 golden retrievers (and their owners) showed up to commemorate the special event.

Just look at all of those good dogs!

"It's such a popular breed," Doreen McGugan, chair of the Golden Retriever Club of Scotland, told TODAY. "And it was the 150th anniversary, which is very special."

The dogs in attendance sound more than a little well-behaved, too! The first night of the gathering, nearly 300 pups in total joined the procession.

"Not one bark in these dogs," McGugan recalled. "It was quite exciting."

While the Guisachan gathering included a breed championship show, McGugan said show dogs weren't the only pooches in attendance.

"It was a lot of pet owners who came just to join the fun," she said. "People didn't realize that it all went back to this and that there is a place to go to commemorate (their golden retrievers)."

"I'm so grateful to everyone who came," she concluded. "I hope they enjoyed themselves."

Judging by the photos, they absolutely did.

'Forgotten' Holocaust heroes help Slovakia come to terms with its past