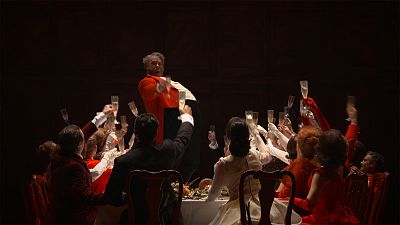 Shakespeare invented him, Verdi made him immortal: "Falstaff" is a comic opera about a bon vivant which is back on the stage of the Royal Opera House in London in a production by the Canadian Robert Carsen. (it premiered in 2012 and was revived for the first time in 2015)

The stage director Robert Carsen says: "He is one of the great mythic characters. To me, he’s a little bit like Don Giovanni gotten older. He represents everything to do with the joys of life, and "carpe diem" is sort of written for him, enjoy the day."

"It’s just a joy to portray this character on the stage," says Bryn Terfel.

"The music is very joyous and of course very celebratory because Falstaff is all about celebrating the pleasures of the flesh," says Carsen. "He loves eating and drinking, so we decided to put eating and drinking in every single scene. And in the end, it looks like everybody’s going to eat Falstaff."

Terfel says the performance takes its toll: "The bellies, the makeup, the wigs and the moustaches and everything … It’s a heavy night for me. I lose 12 pounds because of the pure oven, sauna-feeling within wearing this grandeur on the stage."

This ode to grandeur and gastronomical excess is Verdi’s final operatic masterpiece towards the end of the 19th century (1893).

Carsen adds: "I feel that in the creation of his operas he’s always a modernist but one for me he was more like Rodin modeling the work and trying to get it right, doing another one, trying to shape the thing.

"He’s very rugged in his approach of work except for Falstaff where he finesses everything. But it’s a really exceptional work. And it may be something he decided to do because he knew he wouldn’t be able to write another piece like this."

Terfel asks: "Who else has finished an opera with a fugue? This is one of the musical highlights of this piece. It’s incredible to think that this can be the finale of a piece written by such an old man who was given the gauntlet by Rossini saying: You’ll never write a comic opera. And did he write a comic opera !?"