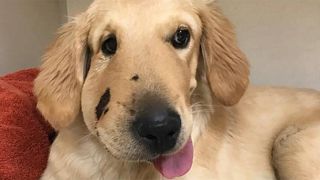 So this morning was up bright and early to go on a hike on 7 th street carefree . It was a beautiful morning but as we were walking down the hill I literally almost stepped on a mf rattlesnake. But my hero of a puppy Todd saved me He jumped right in front   -   Copyright  Paula Godwin / Facebook
By Eun Kyung Kim  with TODAY Lifestyle  •  Updated: 03/07/2018

When Paula Godwin went out for an early morning walk with her dogs on a paved Arizona trail, the only danger she thought she faced was from the searing desert heat.

The golden retriever leaped in front of Godwin right before she was about to step on a rattlesnake.

"My hero of a puppy Todd saved me," she wrote Friday on a Facebook post featuring photos of her injured dog, who took a bite to his face.

"He jumped right in front of my leg were I surely would have got bit," she continued. "This is what a hero looks like please say a little prayer for my sweet hero."

Just hours earlier, Godwin had taken to social media to post a Facebook Live video of herself as she started her morning hike.

"Nobody wanted to come with me — it's too early!" she said.

Godwin's post about her rattlesnake run-in had been shared more than 940 times and generated more than 1,000 comments.

"Todd's doing so well he is a wonder to me how he is healing," she later wrote in a Facebook update. "Just a thank you to all the support Your kindness and support is truly a blessing."

She later posted a photo of herself with her dog, providing an update on the pup.