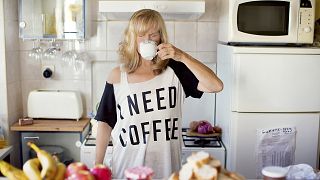 Even the heaviest coffee drinkers are less likely to die early than people who don't drink coffee, new research finds.

It's another piece of good news for coffee lovers, and it gets even better. It doesn't matter what kind of coffee people drink — that includes decaf and instant coffee. And it also doesn't matter what version of the "coffee gene" people have. Coffee drinkers fared better than people who did not drink coffee.

The team at the National Cancer Institute used data from people taking part in a large genetic study in Britain called the U.K. Biobank. More than half a million people volunteered to give blood and answer detailed health and lifestyle questions for ongoing research into genes and health.

The team looked to see who drank coffee, how much and what kind of coffee, and looked for differences in several genes involved in metabolizing caffeine.

Then they looked at death rates over 10 years of the study.

People who drank coffee, no matter how much or what kind they drank, were less likely to die over that 10-year period than non-coffee drinkers, they reported in the Journal of the American Medical Association's JAMA Internal Medicine.

Even people who said they drank more than eight cups a day were less likely to die, on average, than non-drinkers, the team, led by NCI's Erikka Lotfield, reported.

The volunteers were mostly British and have different coffee-drinking habits than much of the rest of the world. For one thing, they were more likely to drink instant coffee.

And some of their habits and characteristics might make these British coffee-drinkers look unhealthier to start with. On the other hand, the U.K. Biobank volunteers are not representative of the British public and might, in fact, be healthier than average because volunteers for medical studies often are.

In the 10 years of follow-up, more than 14,000 people died. But non-coffee drinkers were more likely to have died than coffee-drinkers.

"There has been concern about the health effects of heavy coffee drinking, particularly in participants with common genetic polymorphisms that affect caffeine metabolism," the researchers wrote.

"For example, prior studies have suggested that variants in CYP1A2, (a gene) encoding the enzyme responsible for more than 95 percent of caffeine metabolism, may alter associations of coffee drinking with cardiovascular-related outcomes, with slower caffeine metabolizers having higher risk of developing hypertension (high blood pressure) or having a myocardial infarction (heart attack) relative to their non-drinking counterparts, whereas faster caffeine metabolizers who drink coffee are at no or lower risk of these outcomes."

Their analysis showed no extra risk for any genetic variant, however.

There are several possible explanations for the health benefits of coffee.

It is the No. 1 source in the American diet of antioxidants — chemical compounds that fight the damage to DNA caused by day-to-day living.

It might reduce inflammation in the body, improve how insulin gets used, it might help liver function and it might benefit the linings of the blood vessels.

There is some evidence that coffee can help people recover from colon cancer,lower diabetes riskand reduce the inflammationassociated with diabetes and heart disease.

It may alsoprotect against diabetes, Parkinson's disease and liver cancer.

The research team plans to break down the Biobank data by coffee preparation type — pressed coffee, versus filtered coffee, for example, to see if that makes any difference to health. Some studies have suggested that unfiltered coffee, made in percolaters or French presses, might raise unhealthy cholesterol levels.