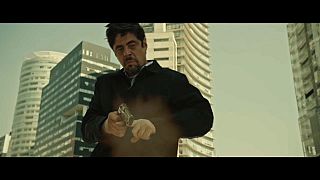 The war against the Mexican drug cartels continues and Hollywood is also cashing in with a cartel film sequel.

"Sicario: Day of the Soldado" is on worldwide release now and is directed by Italian Stefano Sollima.

The actor says his character, a government consultant with a questionable past, has a moral mirror reflecting his actions back to show "he's becoming exactly like those men he despised."

In the second film, Alejandro's skillset is employed once again by an elite U.S. government task force official (Brolin) in a bid to start a war between rival Mexican drugs and people-trafficking cartels.

The authorities plan to kidnap the teenage daughter of one of the cartel leaders, but it backfires. Alejandro is left on his own with the girl to survive the various establishments after them.

In the first film, Del Toro's character has lost his own daughter to drug cartel violence. Asked whether "Soldado 2" is indicative of America's use of violence abroad, the actor agreed:

"They failed. They went on a hint and with an idea and it just blew up on their faces."

After the first "Sicario" film and by starring in similar drugs and violence-related movies like "Traffic", does Del Toro ever get jaded playing characters that deal with organised crime?

"The battle between good and evil, morality. You can explore, you know, love, hate, vengeance, greed, corruption in this, about the human condition in these movies, in these characters that exist in those worlds," he said. "So I look at it like that."

At the movie's premiere in Los Angeles some of the Mexican actors pondered a real life sequel: what happens to their country after next week's election?

"Oh my God. Honestly, it's insane. It's like a, it's like a circus.Everything is bad. Whoever wins," Manuel Garcia-Rulfo said.

The run up to the election has been rife with violence and vote-buying schemes.

State assembly candidate Emigdio Lopez Avendano was killed on Monday during an ambush of his vehicle near the town of Ejutla, south of Oaxaca city.

He was the 19th candidate to be killed.