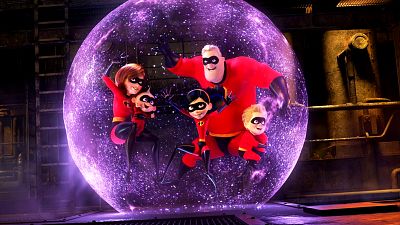 The "Incredibles 2" — the new blockbuster movie that dominated the box office over the weekend — now comes with a health warning.

People with epilepsy have expressed concerns about flashing and "strobe" lights in parts of the animated film "and, in certain instances, people having experienced a seizure during the movie," the Epilepsy Foundation said in a statement.

"We heard about it on Saturday through our social media channels," spokeswoman Jackie Aker told TODAY. "A lot of the people from our community were posting about it, and a few calls came through our help line."

The group wasn't aware of anyone actually having a seizure, but has seen social media posts of people reporting they had experienced problems, she added.

The Epilepsy Foundation requested that Pixar — the studio behind the movie — and its parent company Disney post warnings letting fans know that the flashing lights may trigger seizures in some people.

"We have never asked any movie to do that," Aker said, noting the group did recently ask Apple to take down promotional spots that featured flashing lights and were affecting people with epilepsy. Apple complied with the request, she said.

Messages of caution about the "Incredibles 2" have been popping up as filmgoers also began to warn each other online about the potential effects. Disney is now asking theaters that are showing the movie to notify customers about the potential danger, Variety reported. The Epilepsy Foundation was also aware of the letter, Aker said.

Disney did not immediately reply to a request for comment, but photos posted on social media showed signs at ticket counters and theater lobbies advising moviegoers that the film "contains a sequence of flashing lights which may affect customers who are susceptible to photosensitive epilepsy or other photosensitivities."

The Epilepsy Foundation also wants Disney and Pixar to post warnings on its websites and social media channels. That did not appear to be the case as of Monday morning.

Photosensitive epilepsy affects about 3 percent of people with epilepsy and is more common in children and adolescents. For patients with this condition, exposure to flashing lights at certain intensities or with certain visual patterns can trigger seizures, the Epilepsy Foundation noted. Many may not know they are sensitive to flickering lights or to certain kinds of patterns until they have a seizure.

Triggers can include the flicker of TV screens or computer monitors, rapid flashes, intense strobe lights, and even sunlight shimmering off water or flickering through trees. Lights that flash at five to 30 times per second are most likely to trigger seizures, the group noted.

Last year, a man was arrested for sending a tweet with a strobe light effect that allegedly induced a seizure in a journalist with epilepsy.

In 1997, more than 700 people became sick in Japan after watching flashing lights in a cartoon that set off convulsions and vomiting.